Evil Empire (studio album) by Rage Against The Machine 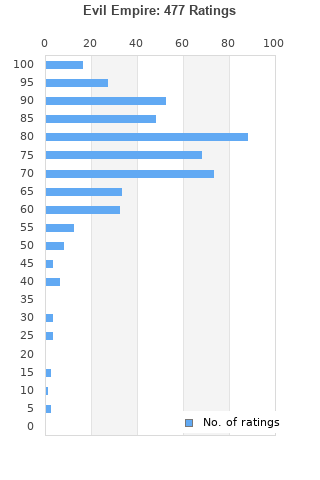 Evil Empire [PA] by Rage Against the Machine (CD, Apr-1996, Epic)
Condition: Very Good
Time left: 8h 27m 38s
Ships to: Worldwide
$1.20
Go to store
Product prices and availability are accurate as of the date indicated and are subject to change. Any price and availability information displayed on the linked website at the time of purchase will apply to the purchase of this product.  See full search results on eBay

Evil Empire is ranked 3rd best out of 5 albums by Rage Against The Machine on BestEverAlbums.com.

Rage Against the Machine / System of a Down tributes Renegades of Rage / Toxicity
Gaslamp Long Beach, Long Beach, United States. 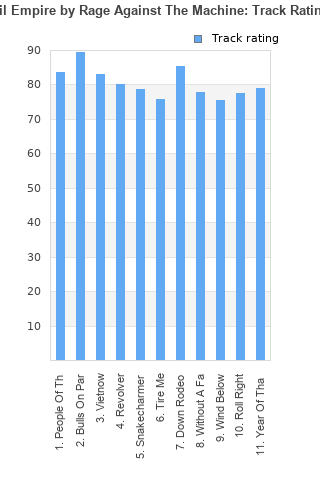 Rating metrics: Outliers can be removed when calculating a mean average to dampen the effects of ratings outside the normal distribution. This figure is provided as the trimmed mean. A high standard deviation can be legitimate, but can sometimes indicate 'gaming' is occurring. Consider a simplified example* of an item receiving ratings of 100, 50, & 0. The mean average rating would be 50. However, ratings of 55, 50 & 45 could also result in the same average. The second average might be more trusted because there is more consensus around a particular rating (a lower deviation).
(*In practice, some albums can have several thousand ratings)
This album is rated in the top 8% of all albums on BestEverAlbums.com. This album has a Bayesian average rating of 76.0/100, a mean average of 74.9/100, and a trimmed mean (excluding outliers) of 76.1/100. The standard deviation for this album is 15.3.

Not as good as their debut, but still really good.

Favorites: Bulls On Parade; Down Rodeo.

Shorter more energetic track than their self titled, which is more my speed, just power through the song and leave you sweating after, it's bliss

Incredible energy displayed. This album is full of angst and frustration boiling almost to the point of desperation to be heard. Excellent album.

There are some great tracks, Bulls on Parade of course, Down Rodeo, People of the Sun, but mostly its just decent.

There are a couple of great songs on this album and a bunch of okey songs. No way near as good as their debut but it's still decent.

How do you follow the most perfectly formed debut of all time?

A solid collection but, with the exception of "Bulls On Parade", nothing on here wouldn't have been the low point of their eponymous debut, if subbed for "Settle For Nothing."

better than their debut.

Definitely not as great as its predecessor, but still great. I really like this album's indie rock sound.

Best songs: People of the Sun, Bulls on Parade, Revolver, and Wind Below

Good, on the footprints of the previous album.

Your feedback for Evil Empire