A Black Mile To The Surface (studio album) by Manchester Orchestra 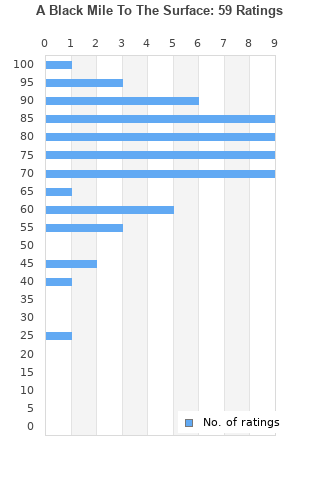 A Black Mile To The Surface is ranked 2nd best out of 7 albums by Manchester Orchestra on BestEverAlbums.com.

The best album by Manchester Orchestra is Mean Everything To Nothing which is ranked number 2712 in the list of all-time albums with a total rank score of 569.

Listen to A Black Mile To The Surface on YouTube 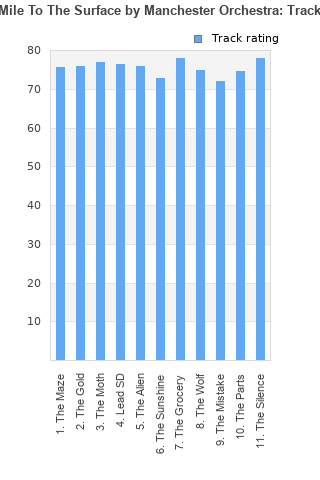 A Black Mile To The Surface rankings

A Black Mile To The Surface collection

A Black Mile To The Surface ratings

Rating metrics: Outliers can be removed when calculating a mean average to dampen the effects of ratings outside the normal distribution. This figure is provided as the trimmed mean. A high standard deviation can be legitimate, but can sometimes indicate 'gaming' is occurring. Consider a simplified example* of an item receiving ratings of 100, 50, & 0. The mean average rating would be 50. However, ratings of 55, 50 & 45 could also result in the same average. The second average might be more trusted because there is more consensus around a particular rating (a lower deviation).
(*In practice, some albums can have several thousand ratings)
This album is rated in the top 10% of all albums on BestEverAlbums.com. This album has a Bayesian average rating of 75.6/100, a mean average of 75.1/100, and a trimmed mean (excluding outliers) of 76.0/100. The standard deviation for this album is 13.8.

A Black Mile To The Surface favourites

A Black Mile To The Surface comments

I loved I'm Like a Virgin, liked Mean Everything to Nothing quite a bit, but then they lost me for awhile. This is their first album since METN that I've liked. There's a bunch of good tracks here that stand up to anything on the first two albums.

I do like this album, but I feel as if it leaves a little to be desired compared to past Manchester albums. I can't help but feel it is a little one dimensional and over-produced. For the most part the songs are there and there are a number of great moments scattered throughout but a lot of the message of the record for me is buried in reverb and studio effects.

Not bad by any means but not close to Andy and company's best work.

My first listen to a Manchester Orchestra album as well, and I really like it. All songs are good, and the transitions from The Alien-The Sunshine-The Grocery are just beautiful. Great album. one of the best of 2017 in my opinion, and very underrated.

This is my first MO album experience and I like it, its IMO one of my favorites for 2017 . It's got some really solid songs in there along with a couple of meh moments as well . I recommend this album & cant wait to explore their back catalogue. Nice one MO !

Really cool album. It's a step in the direction of "Hope" as a opposed to "Cope," which while I prefer the variety of sounds, emotions and dynamics captured in Mean Everything To Nothing and Simple Math, it's still a very interesting album and I also think that following in the quieter direction of Hope is better for the band and fits in better with the late 2010s than the heavier Cope. Tracks 5-7 flow straight from one into the next with the same beat/chord progression as some sort of trilogy and it's awesome. Track 7, The Grocery, brings it to a sort of triumphant finish, and I think it's probably the best song on the album, up there with Lead SD.

Your feedback for A Black Mile To The Surface