Mean Everything To Nothing (studio album) by Manchester Orchestra 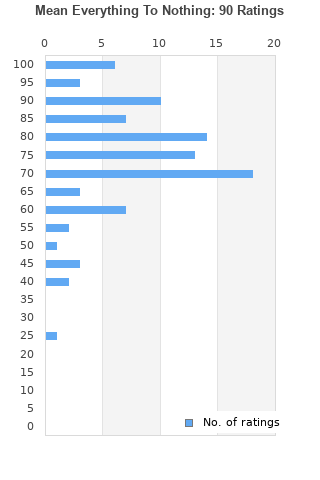 Mean Everything To Nothing, Manchester Orchestra, New
Condition: Brand New
$29.99

Mean Everything To Nothing is ranked as the best album by Manchester Orchestra. 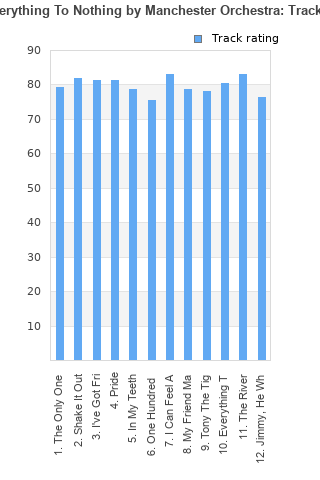 Mean Everything To Nothing rankings

Mean Everything To Nothing collection

Mean Everything To Nothing ratings

Rating metrics: Outliers can be removed when calculating a mean average to dampen the effects of ratings outside the normal distribution. This figure is provided as the trimmed mean. A high standard deviation can be legitimate, but can sometimes indicate 'gaming' is occurring. Consider a simplified example* of an item receiving ratings of 100, 50, & 0. The mean average rating would be 50. However, ratings of 55, 50 & 45 could also result in the same average. The second average might be more trusted because there is more consensus around a particular rating (a lower deviation).
(*In practice, some albums can have several thousand ratings)
This album is rated in the top 11% of all albums on BestEverAlbums.com. This album has a Bayesian average rating of 75.3/100, a mean average of 75.0/100, and a trimmed mean (excluding outliers) of 75.6/100. The standard deviation for this album is 14.9.

Mean Everything To Nothing favourites

Mean Everything To Nothing comments

Wow, i just heard about this album a couple days ago and immediately fell in love with it. And its album of the day 3 days later

A true favorite of mine. I think Mean Everything To Nothing is Andy Hull at his most consistent and overall powerful as a songwriter so far. I enjoy each of Manchester's albums, some more than others, but this is the most cohesive with the best individual tracks.

The River, Shake It Out, I Can Feel A Hot One, and Pride are prime examples of how powerful Manchester's arrangements can be. If you don't feel uplifted by the layered vocal harmony in the second chorus of I've Got Friends, I don't know how to help you.

This is one amazing album with a crazy-good tracklist. And it's not just a great tracklist, they're very cohesive as well. Edges out Simple Math by just a little, for me.

This album will rock your face off in a good way

Manchester Orchestra seem worthwhile. They seem to do their own thing and don't quite fall into the dreaded "mainstream" or the pedestal the likes of Arcade Fire and The Flaming Lips ended up on. They do what they do, play woozy guitar jaunt alongs and have an eye for lyrics. Would half heartedly say they were "underappreciated".

This album has a very outstanding beginning and end, but it does drag on a bit too much in the middle, making it the worst of the three Manchester Orchestra records (though they're all great).

Truly great rock album. Maybe its not the greatest album of all time, but it's certainly one of my favorites.

Shake it out is definitely the best, but in my teeth, pride, and the river are also freakin insane. i love this album

Your feedback for Mean Everything To Nothing