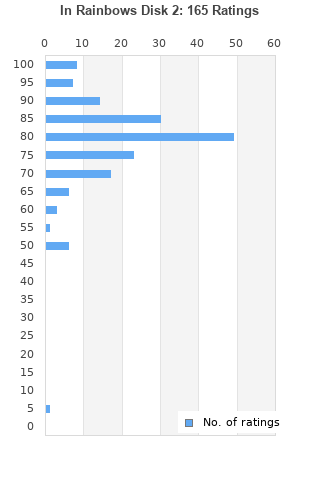 Sorry, no matches on eBay for "In Rainbows Disk 2 Radiohead".
See full search results on eBay

In Rainbows Disk 2 is ranked 13th best out of 22 albums by Radiohead on BestEverAlbums.com.

The best album by Radiohead is OK Computer which is ranked number 1 in the list of all-time albums with a total rank score of 88,735. 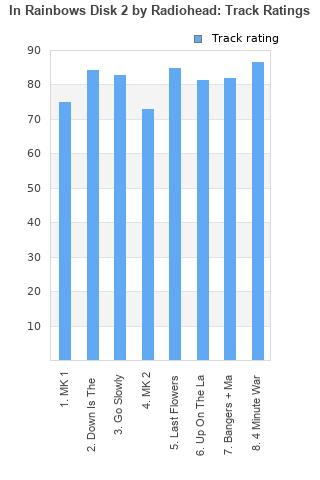 Rating metrics: Outliers can be removed when calculating a mean average to dampen the effects of ratings outside the normal distribution. This figure is provided as the trimmed mean. A high standard deviation can be legitimate, but can sometimes indicate 'gaming' is occurring. Consider a simplified example* of an item receiving ratings of 100, 50, & 0. The mean average rating would be 50. However, ratings of 55, 50 & 45 could also result in the same average. The second average might be more trusted because there is more consensus around a particular rating (a lower deviation).
(*In practice, some albums can have several thousand ratings)
This album is rated in the top 2% of all albums on BestEverAlbums.com. This album has a Bayesian average rating of 79.2/100, a mean average of 79.1/100, and a trimmed mean (excluding outliers) of 79.6/100. The standard deviation for this album is 11.9.

Some nice songs on here. Sounds like In Rainbows made for radio.

Good shit. Songs like Last Flowers, Up on the Ladder and ESPECIALLY 4 Minutes Warning should've made it to the original album instead of Faust arp and House of Cards.


This is just a nightmare, soon i'm gonna wake up...

last time I added this album it got axed for some reason so nobody tell the albummaster about it ;)

"Go Slowly" is a great song!
In Rainbows 2 is not a masterpiece, not as good as "Kid A" or "Ok Computer" but it is definitely worth to listen to.

I'm surprised this EP hadn't been added before. It's a nice collection of songs to play after the original In Rainbows. Favorite songs: "Down is the New Up", "Bangers + Mash", "4 Minute Warning". The last one is actually one of my all-time favorite Radiohead songs. It should've been included in the original album.

Your feedback for In Rainbows Disk 2