Tim (studio album) by The Replacements 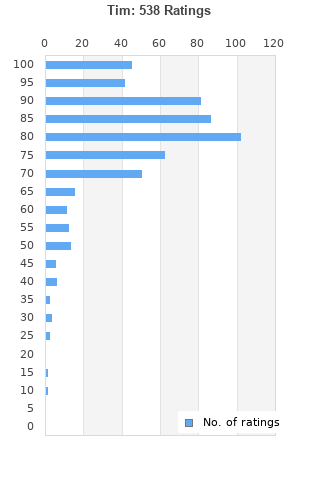 Tim is ranked 2nd best out of 19 albums by The Replacements on BestEverAlbums.com.

The best album by The Replacements is Let It Be which is ranked number 225 in the list of all-time albums with a total rank score of 8,111.

Ray On My Mind
Madison Center for the Arts, Phoenix, United States. 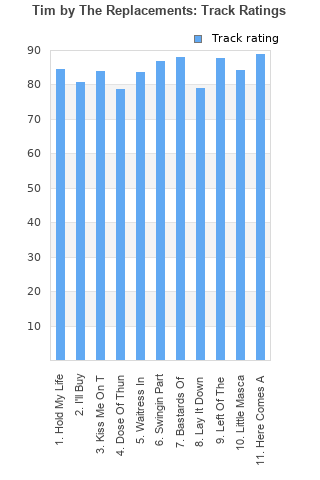 Rating metrics: Outliers can be removed when calculating a mean average to dampen the effects of ratings outside the normal distribution. This figure is provided as the trimmed mean. A high standard deviation can be legitimate, but can sometimes indicate 'gaming' is occurring. Consider a simplified example* of an item receiving ratings of 100, 50, & 0. The mean average rating would be 50. However, ratings of 55, 50 & 45 could also result in the same average. The second average might be more trusted because there is more consensus around a particular rating (a lower deviation).
(*In practice, some albums can have several thousand ratings)
This album is rated in the top 1% of all albums on BestEverAlbums.com. This album has a Bayesian average rating of 80.6/100, a mean average of 80.0/100, and a trimmed mean (excluding outliers) of 80.8/100. The standard deviation for this album is 14.3.

This is not a bad record, but not as brilliant as its predecessor, the sound is not so raw and lyrics although still great less memorable. I want to highlight Hold My Life, Swingin Party, Bastards of Young and beautiful lyrics on Here Comes a Regular.

"God, what a mess, on the ladder of success
Where you take one step and miss the whole first rung."

The opening lines of Bastards of Young perfectly describe the major label debut from The Replacements: A sad tale of talent ruined by insecurity, recklessness, intoxication and self-sabotage.

Tim mixes the fiery post-punk energy of their early years with a mixture of brilliant introspective gems and forgettable rockers.

Side 1 is particularly weak, with I'll Buy and Lay It Down Clown. Waitress in the Sky attempts to charm, but leaves a dull impression.

Side 2 is particularly memorable, with the ballad Here Comes a Regular and the underrated Little Mascara. There's also the anthemic Bastards of Young and Left of the Dial.

Left of the Dial is a particularly charming song about college rock stations that played alternative music in the 80s, romanticized with a troubled couple that yearn for an earlier time when the relationship was young.

It's messy, and The Replacements may have missed the first rung, but they wore their hearts on their drunken sleeves the whole way. Perhaps it's that vulnerable and emotional connection that continues to win them fans to this day.

The momentum here would all come together on a much more solid set of songs on the following LP called Pleased to Meet Me.

Great albums should sound unique, have great memorable songs, and if they are truly special, take the listener on a journey to another place and time. Westerberg and the boys do that on Tim, by making you not just hear the songs but really feel them. You’re reminiscing about people you’ve never met and places you’ve never been.

I was fourteen years old when Tim was released, and I believe it was a review in Rolling Stone that drew my attention to it. It was the first Replacements album that I ever heard, and that's often the factor that makes me love one album by a particular artist more than all the others. I don't remember hearing an album before Tim that had such pathos: such world-weary wisdom mixed with insolent, adolescent rage. I especially love "Kiss Me on the Bus," which somehow perfectly captures the gossipy, whispering qualities of peer pressure, young love, and first kisses. And "Left of the Dial" is straight-up one of the greatest songs of the eighties.

My favourite album by The Replacements. Second half is much more solid as it has the classics, but the entire album is enjoyable.

Tim is an awesome record! Without “Dose of Thunder” and “Lay it down clown”, it would be absolutely perfect. Especially with one of the greatest closers ever “Here Comes a Regular”. This album paints a vivid picture of 1985 small-town America perfectly. 9/10

There's stinkers in 'Dose of Thunder' and 'Swingin Party'

There's Great in 'Bastards of Young' and ' Little Mascara' and

There's the down right sublime in 'Here Comes a Regular'

The tracks on this album work their way into your psych after a few listens , and never leave

And I would definitely recommend listening to the 2008 "Tim" reissue which is also remastered , the production on the original album sounds incredibly distant & the remaster finally brings all the tracks to life

One of the classics from the eighties. Paul sounds so raw, and passionate on here. And even after all this time, "Waitress" still sounds funny.

Lightyears better than "Let it Be" they went in a more REM-esque direction with much success.

Your feedback for Tim