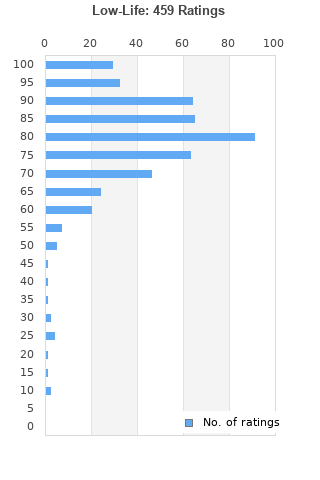 Low-Life is ranked 3rd best out of 28 albums by New Order on BestEverAlbums.com.

The best album by New Order is Power, Corruption And Lies which is ranked number 270 in the list of all-time albums with a total rank score of 7,261. 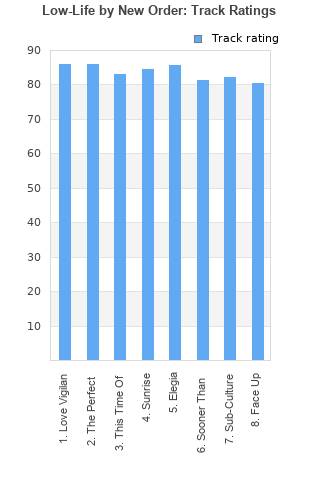 Outliers can be removed when calculating a mean average to dampen the effects of ratings outside the normal distribution. This figure is provided as the trimmed mean. A high standard deviation can be legitimate, but can sometimes indicate 'gaming' is occurring. Consider a simplified example* of an item receiving ratings of 100, 50, & 0. The mean average rating would be 50. However, ratings of 55, 50 & 45 could also result in the same average. The second average might be more trusted because there is more consensus around a particular rating (a lower deviation).
(*In practice, some albums can have several thousand ratings)
This album is rated in the top 2% of albums on BestEverAlbums.com. This album has a mean average rating of 79.0/100. The trimmed mean (excluding outliers) is 80.2/100. The standard deviation for this album is 14.5.

Showing latest 10 comments | Show all 16 comments | Most Helpful First | Newest First
(Only showing comments with -2 votes or higher. You can alter this threshold from your profile page. Manage Profile)

This album offers great guitar play but bad vocals. There are not many really good songs like "The Perfect Kiss" or "Elegia" but even the weaker material always shows glimpses of greatness and the guitar sound of New Order ist very unique. Note that there's also a 12 Inch Mix of "The Perfect Kiss" and a 17 minute version of "Elegia" on the 2008 Collector's Edition of "Low-Life".

It’s difficult to hate them. Even if they sing completely off-key and use the same song structure again and again, they always know to give it a certain spin and throw in a new instrument in to keep your interest.

Solid album from top to bottom. The one-two punch of "This Time of Night" and "Sunrise" (deliberate back-to-back placement?) is what I keep coming back to.

Great album, New Order continues their brilliancy here with tracks such as Love Vigilantes, The Perfect Kiss, Sunrise, Elegia, and Sooner Than You Think. One of their best albums and my personal favorite New Order album

this is somber and wistful electronic music, which has an early-cure-like hypnotic touch (sunrise!) and imho a glimpse of "gentle ebm". i needed more than one attempt to like it but it grew better and better.

Geoff Tate, Empire 30th Anniversary Tour Performing Empire and Rage For Order In Their Entirety , Till Death Do Us Part, Dirt
The Chance, Poughkeepsie, United States.

Your feedback for Low-Life