Psychocandy (studio album) by The Jesus And Mary Chain 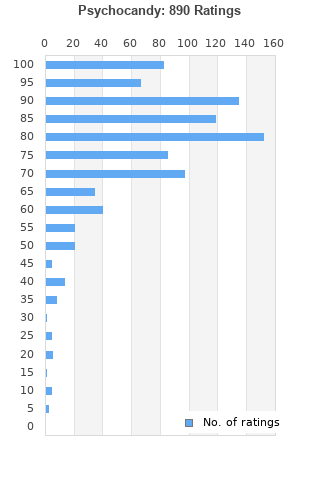 Psychocandy is ranked as the best album by The Jesus And Mary Chain. 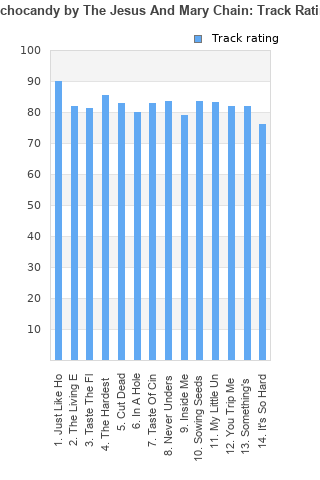 Rating metrics: Outliers can be removed when calculating a mean average to dampen the effects of ratings outside the normal distribution. This figure is provided as the trimmed mean. A high standard deviation can be legitimate, but can sometimes indicate 'gaming' is occurring. Consider a simplified example* of an item receiving ratings of 100, 50, & 0. The mean average rating would be 50. However, ratings of 55, 50 & 45 could also result in the same average. The second average might be more trusted because there is more consensus around a particular rating (a lower deviation).
(*In practice, some albums can have several thousand ratings)
This album is rated in the top 2% of all albums on BestEverAlbums.com. This album has a Bayesian average rating of 79.6/100, a mean average of 78.5/100, and a trimmed mean (excluding outliers) of 79.7/100. The standard deviation for this album is 16.3.

It was fresh in 1985 and still sounds interesting, the first shoegaze album is really a bunch of amazing songs. You can hear strong influence of bands like The Velvet Underground or The Stooges here merged with 80s alternative scene like The Replacements. Sometimes it is too abrasive and too loud even for noise rock, but you can't say that they aren't creating something new here. My favorite tracks: Just Like Honey, The Hardest Walk, Cut Dead, My Little Underground

A fantastic debut album that is credited with being the first/inspired shoegaze. Whatever your views on that genre, Psychocandy is essential listening

some really well written songs but usually they can't really find the balance between way too much noise and no noise at all, unlike bands like SY which do this really well. Occasionally some really boring punk-esque songs in there. The faster songs, counterintuitively to most other punk, have no life. The first 30 seconds of many songs are all they have to offer. The slower songs that build have more emotion and are more fun to listen to in general

Boring punk recorded in steel drum, not for me. I did not get this, I'm too old for this shit.

The album is built upon the clashing of the noise driven feedback that serve as the Foil or dichotomy to the beautiful soft spoken 60's inspired pop vocals. The beauty of this record is the dissonance and not the consonance. Noise and screaming feedback makes you uncomfortable and uneasy, then however the vocals bring a sense of comfort by being something you've heard a thousand times before, a simple singable pop melody. The record is highly connected with its successors, but it has the strength to stand on its own.

For some reason I can't help but think this sounds like The Beach Boys and The Velvet Underground mashed together. Great songs, though.

Grating, brutal and paving the way for shoegaze, its obvious that Psychocandy must've been pretty powerful at the time it was released (it still is). Every song is just filled with that noisy fuzz and feedback to the point where it gives me a headache. That said, each individual song is almost flawless, and - I gotta say - I love me that wall of noise so much I can't stop listening. Setting a benchmark for future bands (A Place to Bury Strangers essentially copied their early sound from this album), The Jesus and Mary Chain have an instant classic with this record. The only points docked are for lack of variability within the album - many songs sound similar/the same - but they are all phenomenal so....

Your feedback for Psychocandy