Love (studio album) by The Cult 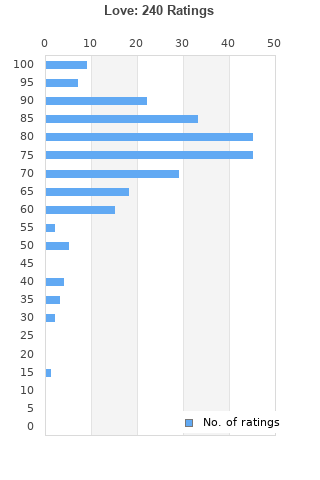 Love is ranked as the best album by The Cult.

The Meteors, The Cult of Spaceskull
The Sanctuary Detroit, Hamtramck, United States. 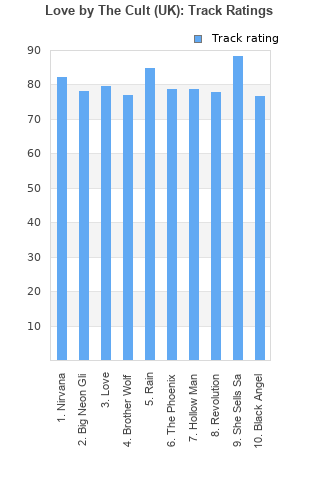 Rating metrics: Outliers can be removed when calculating a mean average to dampen the effects of ratings outside the normal distribution. This figure is provided as the trimmed mean. A high standard deviation can be legitimate, but can sometimes indicate 'gaming' is occurring. Consider a simplified example* of an item receiving ratings of 100, 50, & 0. The mean average rating would be 50. However, ratings of 55, 50 & 45 could also result in the same average. The second average might be more trusted because there is more consensus around a particular rating (a lower deviation).
(*In practice, some albums can have several thousand ratings)
This album is rated in the top 7% of all albums on BestEverAlbums.com. This album has a Bayesian average rating of 76.1/100, a mean average of 75.6/100, and a trimmed mean (excluding outliers) of 76.2/100. The standard deviation for this album is 13.6.

Great piece of alternative 80s music with a bit of goth rock and new wave. Nirvana and Rain are the best tracks here in my opinion.

This feels like a very generic group of songs that lack character and edge in my opinion. Other than Rain and She Sells Sanctuary the rest are pretty skippable and none really grab me or draw me into the music. It feels a bit lifeless at times and like it is lacking quite a bit of energy. The choruses can be quite cringey and sound really dated especially on Revolution and Nirvana. The record feels very drawn out as well with some songs going on for 2 or 3 minutes too long making me just wait for them to end. The atmosphere is pretty consistent but isn't created as effectively as it could be. Overall, a few good singles but this record is pretty weak in my opinion.

The Cult was one of my favorite rock bands of the eighties, with Ian Astbury's Jim Morrison-like persona and Billy Duffy's scorching work on the guitar leading the charge. The Cult managed to weave together New Wave eighties vocal stylings, the loudness and grittiness of metal, and the New Age mysticism of post-punk, producing on their second full-length album one of the most undeniably great albums of the eighties. The high point here is the mysterious and hard-rocking "She Sells Sanctuary," one of the best, if not also one of the most lyrically impenetrable, songs of its generation. Unfortunately, The Cult never came close to making another album anywhere near this great, and they've gradually settled back into obscurity. But for the brief time that they shined, they sure did shine brightly.

Atmospheric. The album has a consistent tone, and despite all the singles, this is the peak of gothic-version Cult. It is almost a concept album, lots of elemental / weather references, missing people, returning, spirituality. Whereas by the time of the Ceremony album the same lyrics came out as "the same schtick all over again". Astbury doesn't over-sing, whereas in later albums he seems to feel the need to fill every gap.

A good album, psychedelic oriented hard melodic rock.Nice songs on this and a characteristic atmosphere and guitar sound all over the album.

Really fantastic album, so many great singles and it doesn't even feel like a singles album... It creates the atmosphere and is coherent which is unusual for the "singles" albums

An album of good consistent songs with one stand out track - She Sells Sancroary. I enjoy this album but I've not been driven to seek out any other Cult album.

Nothing mind-blowing but "Rain" and "She Sells Sanctuary" hint that The Cult could have been something better with a little more application... or taste.

feels like a mixture of u2 and the mission. quite enjoyable music but something is missing. couldn't quite catch what it is... maybe strangeness?

Your feedback for Love