The Head On The Door (studio album) by The Cure 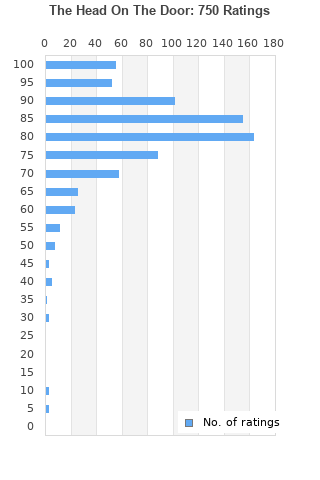 The Head On The Door is ranked 3rd best out of 37 albums by The Cure on BestEverAlbums.com.

The best album by The Cure is Disintegration which is ranked number 33 in the list of all-time albums with a total rank score of 29,352.

Listen to The Head On The Door on YouTube 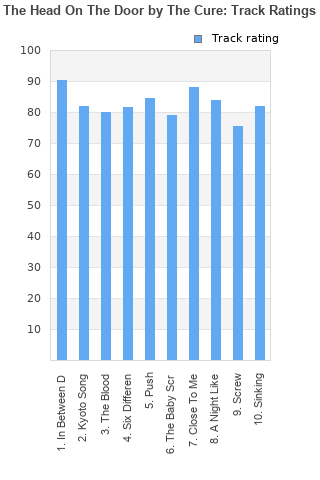 The Head On The Door rankings

The Head On The Door collection

The Head On The Door ratings

Rating metrics: Outliers can be removed when calculating a mean average to dampen the effects of ratings outside the normal distribution. This figure is provided as the trimmed mean. A high standard deviation can be legitimate, but can sometimes indicate 'gaming' is occurring. Consider a simplified example* of an item receiving ratings of 100, 50, & 0. The mean average rating would be 50. However, ratings of 55, 50 & 45 could also result in the same average. The second average might be more trusted because there is more consensus around a particular rating (a lower deviation).
(*In practice, some albums can have several thousand ratings)
This album is rated in the top 1% of all albums on BestEverAlbums.com. This album has a Bayesian average rating of 81.6/100, a mean average of 80.8/100, and a trimmed mean (excluding outliers) of 81.7/100. The standard deviation for this album is 12.8.

The Head On The Door favourites

The Head On The Door comments

My favourite Cure album. I tend to find that even though I love the band and they have written some of my favourite songs, that the albums are too hit-and-miss and contain too many duds. This one is in my opinion their most consistent album. My highlights are In Between Days and A Night Like This - both incredible songs, + Push just behind them. Screw, Sinking and The Baby Screams are the weakest tracks.

Long time fan of the band, and this is, hands down, my favorite Cure album. It evokes so many memories of my early teens, coming of age…but even now, there’s not a single track I want to skip. When I put this record on, I inevitably listen to the entire thing. I get up, flip sides, and take it all in. Every time. How often can you say that of a record? As much as I like the vast majority of their catalogue, I can’t say that about any of their others. This is their peak. Everything prior was leading up to this, everything after got slowly worse imo. If you’re new to The Cure, start here and thank me later.

This is my favourite Cure album. Perhaps not quite as critically-acclaimed as Disintegration, but a great album from start to finish.

I enjoy this most out of their output. Long intros, melodic and interesting subject matters. Kyoto song is just lovely in its despair, in between days is well crafted and the highpoint. The infidelity on a night like this has a palpable distress. All round their best in my view.

I recall them at the time and actually quite liked them but was probably a bit freaked out with Robert Smiths' Gothic look. Been giving their albums a listen in recent years and gave this a re listen in 2020 after catching them in concert. Close To Me and Six Different ways are just superb and 10/10 tracks. The album does go a little up and down for me - sometimes you get a great start or finish but they have paced out the killer tracks in my view. Only let down is Screw - not landing for me. But a great album none the less

Inspired by the albums 'Kaleidoscope' (Siouxsie and the Banshees) and 'Dare' (Human League) Bob set out to produce a record that was eclectic with a range of styles and moods . Mission accomplished with the pop styling's of "Inbetween Days" and "Close To Me" to the Spanish feel of "The Blood" , the angular weirdness that is "Six Different Ways" , the fullness of "Push" , the new wave-ish "Baby Screams" , the darker "A Night Like This" and "Sinking" where the lyrics don't kick in until the 2 minute mark

A fantastic album - Close To Me and Six Different Ways are outstanding. In Between Days and Push are great. But feel there are a couple of weaker tracks on the album like Screw and A Night Like This.

Bassline to "Sinking" is the best thing on this album. Every b-side to every The Head On The Door single is amazing.
Favourite: "Sinking"
Least: "The Blood"

Your feedback for The Head On The Door