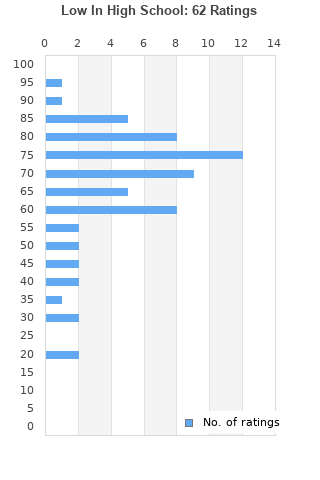 Low In High School - Spanish Version - ... Morrissey UK vinyl LP record
Condition: Used
Time left: 9h 58m 42s
Ships to: Worldwide
£56.69
Go to store
Product prices and availability are accurate as of the date indicated and are subject to change. Any price and availability information displayed on the linked website at the time of purchase will apply to the purchase of this product.  See full search results on eBay

Low In High School is ranked 8th best out of 23 albums by Morrissey on BestEverAlbums.com.

The best album by Morrissey is Viva Hate which is ranked number 1091 in the list of all-time albums with a total rank score of 1,644.

Sweet and Tender Hooligans - A Tribute to Morrissey and The Smiths
The Music Box, San Diego, United States. 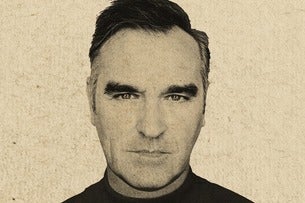 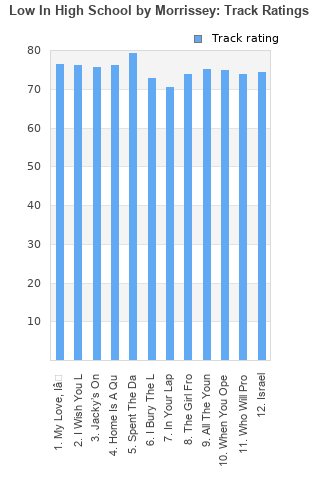 Rating metrics: Outliers can be removed when calculating a mean average to dampen the effects of ratings outside the normal distribution. This figure is provided as the trimmed mean. A high standard deviation can be legitimate, but can sometimes indicate 'gaming' is occurring. Consider a simplified example* of an item receiving ratings of 100, 50, & 0. The mean average rating would be 50. However, ratings of 55, 50 & 45 could also result in the same average. The second average might be more trusted because there is more consensus around a particular rating (a lower deviation).
(*In practice, some albums can have several thousand ratings)
This album has a mean average rating of 68.0/100. The trimmed mean (excluding outliers) is 67.9/100. The standard deviation for this album is 16.7.

Another chequered album in the same vein as his releases since "Ringleader" Lop off the 3 weakest tracks and yes you'd have a strong 8 to 8.5 record but I think Moz at his age is more invested in getting his various views across for prosperity's sake than delivering the tightest album ever.

I do love this album, the only thing I would change is the front cover.

For anyone thinking Morrissey has lost his way, if you compare this to Southpaw Grammar, Maladjusted or Kill Uncle, as interesting as those albums are, and they all some wonderful highlights, I do feel Low In High School offers much more.

Compared to some of those 90's albums, this is richer both musically and vocally. Lyrically it is quite different, maybe not as subtle, but here the songs are very direct, much like Meat Is Murder was after the Smiths poetic debut.

The recent bad press goes to proves how full of hate the internet is in general, maybe Morrissey hasn't helped himself so much with certain controversies but unfortunately the reception for this album has not been what it should have.

The first 4 tracks are some of the best Morrissey has ever done (in fact, the 3 best tracks, My Love I'd Do Anything for You, Jackie's Only Happy When She's up on the Stage and Home is a Question Mark are tracks 1, 3 and 4 respectively) while the rest is mixed, I like all the songs on here to some extent, though I will admit that Spent the Day in Bed, In Your Lap and The Girl from Tel-Aviv Who Wouldn't Kneel aren't really particularly good songs.

The second half of the album has really grown on me though, Who Will Protect us from the Police and Israel have risen in my estimations especially, the former being very listenable if slightly repetitive and the latter being very good if you try to ignore the fact that he is singing about Israel.

Mixed about this one.

Moz's voice is as rich and powerful as it's ever been, and the production value gives this record far more energy than World Peace. As a diehard Morrissey fan, this alone makes this album a success in my eyes.

That said, Low in High School is *extremely* top-heavy. "Home is a Question Mark" and "My Love, I Would Do Anything For You" in particular lead me to believe that if Mando Lopez had written the whole album, it would have been a really strong outing.

However, despite that LITS starts well, this record drags really really heavily on the B-side, which sort of descends into a self-indulgent mess with a lot of weird musical pastiches tacked on (The attempted samba in Girl From Tel-Aviv, for example).

Highlights: Home Is A Question Mark, My Love I Would Do Anything For You, I Wish You Lonely

I’m a huge Smith’s fan but have been lukewarm to Mozzas solo stuff bar Viva La Hate ( or “ Education In Reverse “ as released in Australia) . And so it was with some trepidation I checked out “ Low In Highschool” , and the verdict? It’s not too bad. Track 1 “ My Love I’d Do Anything For You “ is rather excellent and quite rightly kickstarts things. The next 5 tracks whilst not as good as track 1 all go alright. Unfortunately from here things take a turn for the worst, “ In You Lap” , “The Girl From Tel- Aviv” , “ All The Young People “ and “ When You Open You’re Legs” all pretty much stink and are obviously included to pad the album out. But all is not lost as the closing 2 tracks are good especially closer “ Israel “ as 2nd best album track. Be reassured dear listeners that Low In Highscool contains all the ingredients of a Mozza release: cynicism in spades that drips with sarcasm all the while with tounge firmly planted in cheek. I wouldn’t say Morrissey is back but this album is worth a listen (just skip by tracks 7,8, 9, 10)

Your feedback for Low In High School