Castaways And Cutouts (album) by The Decemberists Castaways And Cutouts by The Decemberists (2002)
Overall rank: 2,092nd 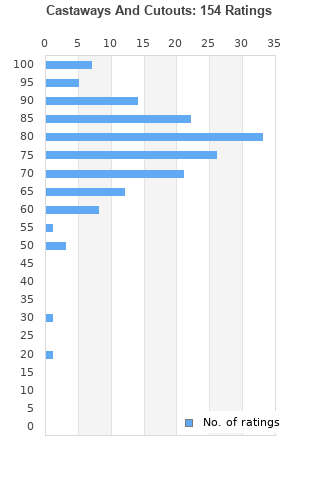 Castaways And Cutouts is ranked 5th best out of 16 albums by The Decemberists on BestEverAlbums.com.

The best album by The Decemberists is The Crane Wife which is ranked number 658 in the list of all-time albums with a total rank score of 2,805. 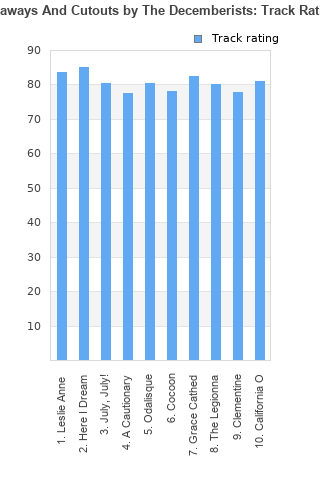 Outliers can be removed when calculating a mean average to dampen the effects of ratings outside the normal distribution. This figure is provided as the trimmed mean. A high standard deviation can be legitimate, but can sometimes indicate 'gaming' is occurring. Consider a simplified example* of an item receiving ratings of 100, 50, & 0. The mean average rating would be 50. However, ratings of 55, 50 & 45 could also result in the same average. The second average might be more trusted because there is more consensus around a particular rating (a lower deviation).
(*In practice, some albums can have several thousand ratings)
This album is rated in the top 4% of albums on BestEverAlbums.com. This album has a mean average rating of 77.0/100. The trimmed mean (excluding outliers) is 78.1/100. The standard deviation for this album is 12.5.

This is my favorite Decemberists album for its simplicity, compared to the mostly baroque albums that started with Picaresque. I feel like this album and the one that followed, Her Majesty the Decemberists, an inferior companion to this one, were their last sincere albums before they became a curdled starbucks chamber ensemble. (I'm especially allergic to "The Crane Wife," which I liked for about a year.) The songs are just good songs, with beautiful melodies and stories that don't work terribly hard.

Favorite Tracks: Here I Dreamt I Was An Architect, A Cautionary Song & Leslie Anne Levine

Not as good as their top 2-3 albums but this is real solid. Just a real good sounding band. MEZ

July, July! is my favorite song.

Certainly not the conventional choice when it comes to Decemberists albums, but I think that this is one of their most pleasing experiences. The later albums were more polished, but at the expense of charm.

The first two tracks are as good as anything off of the Crane Wife or Picaresque. The rest of the album is top-notch as well (even if "A Cautionary Song" isn't much more than the world's most hyper-literate "yo mamma" joke)

The decemberists' "castaways and cutouts" is a literary yarn of sea shanties and seaside romance gone awry full of parapets and petticoats. Literary alt-rock with a unique lyrical P.O.V. (vs all the other alt-rock out there) with songs like "here I dreamt I was an architect" (an architect who "built this balustrade / To keep you home, to keep you safe / From the outside world"), "july! July!" ("i say your uncle was a crooked french canadian / and he was gut-shot runnin gin ") and its propulsion towards the strange, and "grace cathedral hill" and its lackluster new year's ("Some way to greet the year: / your eyes all bright and brimmed with tears. / The pilgrims, pills and tourists here all sing / "Fifty-three bucks to buy a brand new halo." "). There's a variety of instrumentation backing colin's off-kilter, off-cove vocals. The other songs are pretty good...and dark, like "leslie anne levine", a dead child who sings "my name is Leslie Anne Levine / my mother birthed me down a dry ravine / my mother birthed me far too soon / born at nine and dead at noon", or like "a cautionary tale" about a mom who whores to feed her kid ("the next time she tries to feed you collard greens, remember what she does when you're asleep"). "cocoon" overstays its welcome, but it's the only one. 10 minute closer "california one / youth and beauty brigade" ("We're calling all bed wetters and ambulance chasers / Poor pick-pockets, bring 'em in / Come join the youth and beauty brigade") never dulls and hints at epic numbers to come. Fun album. 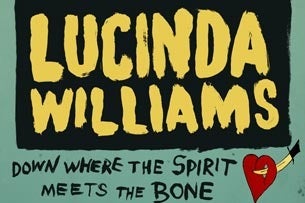 Your feedback for Castaways And Cutouts