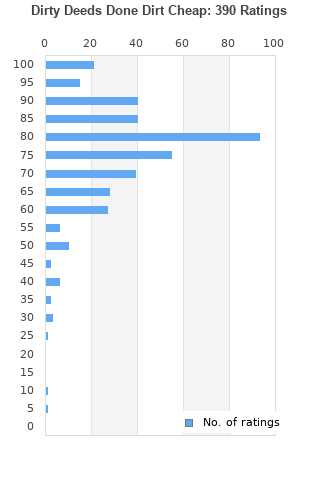 AC/DC Dirty Deeds Done Dirt Cheap Cassette Tape CS 16033
Condition: Very Good
Time left: 1h 54m 8s
Ships to: Worldwide
$7.12
Go to store
Product prices and availability are accurate as of the date indicated and are subject to change. Any price and availability information displayed on the linked website at the time of purchase will apply to the purchase of this product.  See full search results on eBay

Dirty Deeds Done Dirt Cheap is ranked 5th best out of 25 albums by AC/DC on BestEverAlbums.com.

The best album by AC/DC is Back In Black which is ranked number 133 in the list of all-time albums with a total rank score of 13,431. 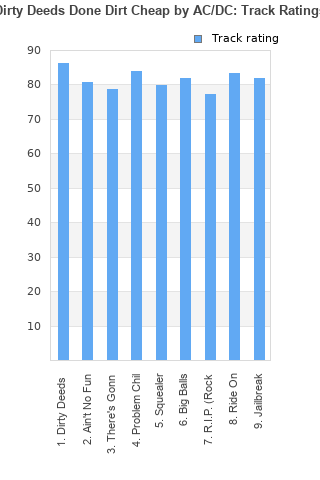 Rating metrics: Outliers can be removed when calculating a mean average to dampen the effects of ratings outside the normal distribution. This figure is provided as the trimmed mean. A high standard deviation can be legitimate, but can sometimes indicate 'gaming' is occurring. Consider a simplified example* of an item receiving ratings of 100, 50, & 0. The mean average rating would be 50. However, ratings of 55, 50 & 45 could also result in the same average. The second average might be more trusted because there is more consensus around a particular rating (a lower deviation).
(*In practice, some albums can have several thousand ratings)
This album is rated in the top 6% of all albums on BestEverAlbums.com. This album has a Bayesian average rating of 76.8/100, a mean average of 75.9/100, and a trimmed mean (excluding outliers) of 76.9/100. The standard deviation for this album is 14.6.

Prefer the International release which is not here on this website. Classic Album of the 70's.

The tracklist you see above is the original Australian version which is about a billion times better than the international version. The Australian version has jailbreak and rip as well as the full versions of the title track and ain’t no fun.

This is not the international version I was gonna review, please put also that version!

As with T.N.T., half of this album is pure ACDC gold. Unlike T.N.T., the other half isn't great; it's... okay... It's a step back, but don't think it only goes downhill from here, because there next effort is at least 5 steps up.

This is quite dull even for a AC/DC album.

Doesn't anybody else have the feeling that this album (and I don't have that with any of their other albums) sounds a lot like the typical boogie rock of Status Quo but only a bit worse.
I like it but a lot less than many other albums of theirs.

Great silly fun from AC/DC, dirty deeds done diet cheap, like previous album, high voltage, is a compilation of tracks rather than a proper LP. Still it's a lot of fun with the title track, big balls, and the uncharacteristicly laid back, ride on, all great. Good fun.

Good album but AC/DC's weakest during the Bon Scott era

I have the international version which has a different track listing. On that one the first half is great and the second half trails off. Perhaps this track listing would be more interesting. The title track is a classic.