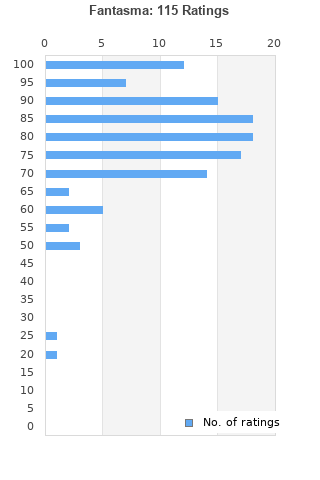 Fantasma is ranked as the best album by Cornelius. 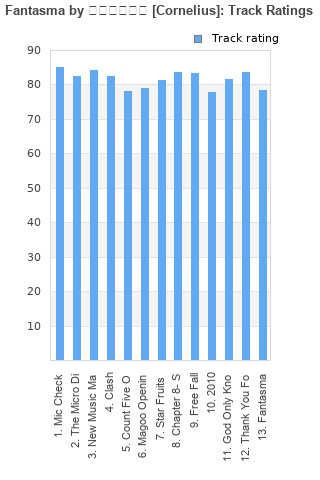 Rating metrics: Outliers can be removed when calculating a mean average to dampen the effects of ratings outside the normal distribution. This figure is provided as the trimmed mean. A high standard deviation can be legitimate, but can sometimes indicate 'gaming' is occurring. Consider a simplified example* of an item receiving ratings of 100, 50, & 0. The mean average rating would be 50. However, ratings of 55, 50 & 45 could also result in the same average. The second average might be more trusted because there is more consensus around a particular rating (a lower deviation).
(*In practice, some albums can have several thousand ratings)
This album is rated in the top 2% of all albums on BestEverAlbums.com. This album has a Bayesian average rating of 80.6/100, a mean average of 80.8/100, and a trimmed mean (excluding outliers) of 81.3/100. The standard deviation for this album is 12.8.

Crazy album. Very underrated. Lots of style blending. Very captivating piece of music, keeps you hooked the entire listen. Its psychedelic, dreamy, beautiful, at times heavy, and its a classic. 10/10

What starts out as an enthralling joy ride somehow doesn't hold up over multiple listens. Still a lot of fun though, worth checking out.

You feel like you've just caught a taxi to fulfill your next mundane task at hand with your dysfunctional relationship with life; but your cab driver is an eccentric Japanese man and he sends you to space and takes you on a 50 minute tour exploring the universe. It's the dreamiest and most beautiful thing you'll ever experience.

Your feedback for Fantasma