In The Attic Of The Universe (studio album) by The Antlers 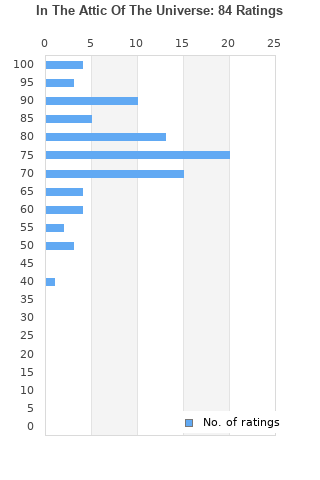 Sorry, no matches on eBay for "In The Attic Of The Universe The Antlers".
See full search results on eBay

In The Attic Of The Universe is ranked 4th best out of 9 albums by The Antlers on BestEverAlbums.com.

The best album by The Antlers is Hospice which is ranked number 227 in the list of all-time albums with a total rank score of 8,603.

Listen to In The Attic Of The Universe on YouTube 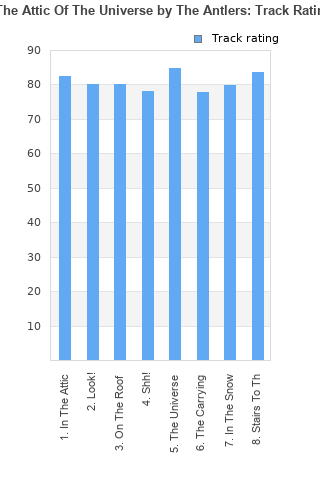 In The Attic Of The Universe rankings

In The Attic Of The Universe collection

In The Attic Of The Universe ratings

Rating metrics: Outliers can be removed when calculating a mean average to dampen the effects of ratings outside the normal distribution. This figure is provided as the trimmed mean. A high standard deviation can be legitimate, but can sometimes indicate 'gaming' is occurring. Consider a simplified example* of an item receiving ratings of 100, 50, & 0. The mean average rating would be 50. However, ratings of 55, 50 & 45 could also result in the same average. The second average might be more trusted because there is more consensus around a particular rating (a lower deviation).
(*In practice, some albums can have several thousand ratings)
This album is rated in the top 5% of all albums on BestEverAlbums.com. This album has a Bayesian average rating of 77.1/100, a mean average of 77.1/100, and a trimmed mean (excluding outliers) of 77.6/100. The standard deviation for this album is 12.2.

In The Attic Of The Universe favourites

In The Attic Of The Universe comments

I think this is their second best album after Hospice, but I honestly don't think it's all that far below. I would definitely still rate Hospice higher because it has incredibly good lyrics and it's a lot more emotional, but this album has a more calming feel to it, due in part to the way the songs run together, and it's a lot less dark so if I'm not in the mood for slow, depressing stuff it's more enjoyable to listen to. Overall, very good album. The highlight for me is The Universe Is Going To Catch You.

Some decent songwriting, and a nice outing of sorts, but lacking in the crushing production and style that makes their following work so damn essential.

this album is horridly underrated. I don't know why, but i have always felt a closer connection to this rather than hospice or burst apart. the music just really connects to me on this album. I'll probably put it in my chart instead of hospice

The world needs more concept-EPs. Such a joy to listen to in a short amount of time.

Your feedback for In The Attic Of The Universe