And Then Nothing Turned Itself Inside-Out by Yo La Tengo
Year: 2000
Overall rank: 914th 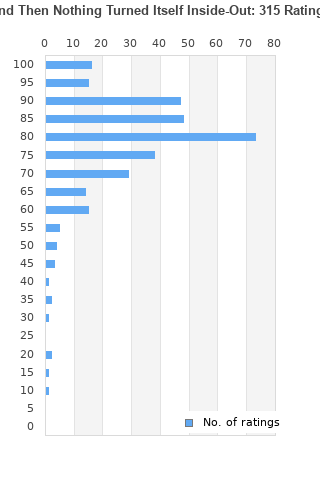 Yo La Tengo - And Then Nothing Turned Itself Inside-Out [New Vinyl LP]
Condition: New
$36.19

Yo La Tengo - And Then Nothing Turned Itself Inside Out - Yo La Tengo CD OAVG
Condition: Very Good
$201.98

And Then Nothing Turned Itself Inside-Out is ranked 2nd best out of 26 albums by Yo La Tengo on BestEverAlbums.com.

The best album by Yo La Tengo is I Can Hear The Heart Beating As One which is ranked number 446 in the list of all-time albums with a total rank score of 4,189.

Listen to And Then Nothing Turned Itself Inside-Out on YouTube 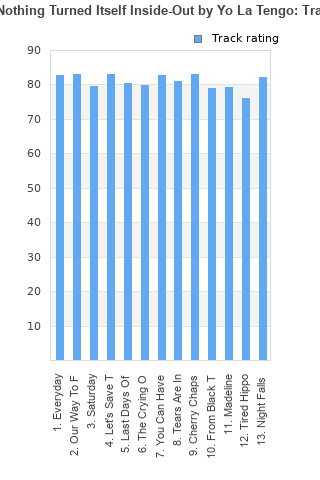 And Then Nothing Turned Itself Inside-Out rankings

And Then Nothing Turned Itself Inside-Out collection

And Then Nothing Turned Itself Inside-Out ratings

Rating metrics: Outliers can be removed when calculating a mean average to dampen the effects of ratings outside the normal distribution. This figure is provided as the trimmed mean. A high standard deviation can be legitimate, but can sometimes indicate 'gaming' is occurring. Consider a simplified example* of an item receiving ratings of 100, 50, & 0. The mean average rating would be 50. However, ratings of 55, 50 & 45 could also result in the same average. The second average might be more trusted because there is more consensus around a particular rating (a lower deviation).
(*In practice, some albums can have several thousand ratings)
This album is rated in the top 2% of all albums on BestEverAlbums.com. This album has a Bayesian average rating of 79.4/100, a mean average of 78.3/100, and a trimmed mean (excluding outliers) of 79.6/100. The standard deviation for this album is 14.3.

And Then Nothing Turned Itself Inside-Out favourites

And Then Nothing Turned Itself Inside-Out comments

This is an extremely mellow and relaxing listen that also has moments of depth and outstanding quality. Songs like Our Way To Fall, The Crying Of Lot G and Tears Are In Your Eyes exemplify this perfectly and expertly display the groups strengths. They are all so easy to enjoy and just make you feel so laid back yet also involved with the sound. Then there is my favourite track on the album in Let's Save Tony Orlando's House which is just a masterpiece and the vocal on that song is a thing of pure beauty and it is backed perfectly by the instrumental. The atmosphere is maintained well also and the record is very consistent up until around track 9 where the quality does take a significant dive in my opinion. I found myself being sucked out of the record quite a lot at this point and the music made me feel fatigued as the album was starting to feel a little bloated and stretched out. I then saw the upcoming closer that was 17 minutes long and I was worried the record was going to be ruined by the finale. However, the song was a huge return to form and the first 10 minutes of the song is truly exceptional and the final 7 slowly ease you out of the record perfectly. The last song really leaves you satisfied with your experience and makes the slight decline near the end a lot more bearable. Overall, this is a great record with hints of being phenomenal and it has made me think about revisiting the groups discography.

This one is way better than I Can Hear the Heart Beating as One.

In the late 1990’s early 2000’s bands such as Pavement, Weezer and The Strokes garnered a lot of hype and critical acclaim, but there was another band just bubbling below the surface who were quietly and methodically building a stellar catalogue.Adored by critics and fans alike but largely unknown beyond this inner circle. Of course I’m talking about Y.L.T

This was the album for me that unlocked this wonderful band with its Lo-Fi / stoned vibe reminiscent of another fave of mine the Lo-Fi masters Low. Like all great albums ATNTIIO is quite the slow burn requiring time, patience and commitment, but once a song like “You Can Have It All” gets under your skin it becomes a real ah-huh moment

I 100% agree with an earlier poster questioning the inclusion of the Sonic Youth-esque track “Cherry Chapstick” , it really is a mood breaker

I took a nap to this and it might have been the greatest one in my life.

A very nice album to get lost in, took a few listens to get fully into it since I'm used to the more noisy side of Yo La Tengo, but definitely worth it

You’ve just had the perfect day. Sun drenched and bone tired, you gather up your things with your friends. There is sand in your hair and on your bare feet, but you don’t care. You can wash it off tomorrow. You pile into the car laughing about some inside joke that no one outside that day would ever understand. The car hits the road and everyone grows silent, lost in their own little world as they reminisce and take in the day. Sinking into their seats as the sun begins to set on the horizon. THIS is the album for that ride home. No one says a word. No one needs to say a word. There’s nothing to say. The days fond memories and the music meld perfectly together as the wind the from the half open car windows plays with your hair. And you all fall half asleep with a half smile on your face thinking the same thought - this was the greatest day.

Grade: A. Finishing perhaps one of the greatest four run album runs in indie, hell rock history, …And Then Nothing Turned Itself Inside-Out is Yo La Tengo at their mellowest. They know the perfect music for the ride back from the Jersey shore, and this is it. Like all the albums in this four run stretch from Painful to ATNTIIO, this is essential indie rock. Yo La Tengo always got a bit overlooked perhaps because they never broke up or maybe because their music was always a bit more understated and less headline grabbing, but they are easily one of the greatest indie rock bands of the 90s. And you need to look no further than this (almost) seamless masterpiece to find out why.

Aside: My one (minor) quibble with this album is with “Cherry Chapstick”. It’s a great song, but breaks up the super mellow vibe of the rest of the album. It’s a song that would have fit much better on Electr-o-pura or I Am Not Afraid of You and Will Beat Your Ass.

Your feedback for And Then Nothing Turned Itself Inside-Out