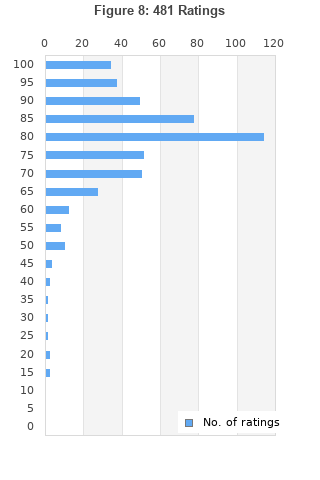 Figure 8 is ranked 4th best out of 10 albums by Elliott Smith on BestEverAlbums.com.

The best album by Elliott Smith is Either/Or which is ranked number 131 in the list of all-time albums with a total rank score of 12,698. 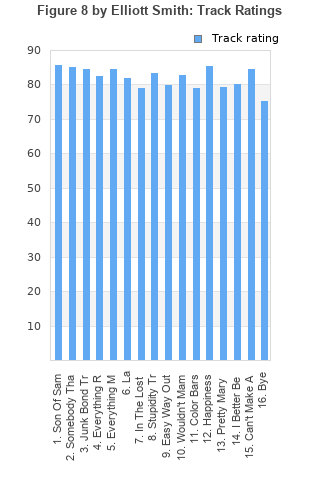 Somebody That I Used To Know
Rating: 85 (102 votes)Comments:

Rating metrics: Outliers can be removed when calculating a mean average to dampen the effects of ratings outside the normal distribution. This figure is provided as the trimmed mean. A high standard deviation can be legitimate, but can sometimes indicate 'gaming' is occurring. Consider a simplified example* of an item receiving ratings of 100, 50, & 0. The mean average rating would be 50. However, ratings of 55, 50 & 45 could also result in the same average. The second average might be more trusted because there is more consensus around a particular rating (a lower deviation).
(*In practice, some albums can have several thousand ratings)
This album is rated in the top 2% of all albums on BestEverAlbums.com. This album has a Bayesian average rating of 79.8/100, a mean average of 79.0/100, and a trimmed mean (excluding outliers) of 79.9/100. The standard deviation for this album is 13.7.

I prefered Either/or but still every song were very good with nice instruments.

Sadly this would be ES’s swan song, within 3 years he’d be gone forever

IMO the best Elliott Smith album, yes it does take a long time to really appreciate it which is why some of the reviewers score low, my advice is keep plugging away and it will draw you in and be with you forever.

The longest Elliott Smith album to this point, almost ten minutes longer than its predecessor and an entire 22 minutes longer than his debut, Roman Candle. Normally this would mean that an artist is on an unstoppable songwriting streak and/or there's a long list of sounds they want to explore. For Smith on Figure 8, I'm not sure which was the point. I think I read somewhere that he was going for something dense and difficult to completely crack, and it looks like he just about accomplished that. There's a deceiving quality of simplicity surrounding some of his most avant-garde and warm pop music, and I might need a few more listens to know exactly what's going on.
Favorites: “Somebody That I Used to Know”, “Son of Sam”, “Happiness/The Gondola Man”, ”Wouldn't Mama Be Proud?”, “Couldn't Make a Sound“, “Junk Bond Trader”, “Stupidity Tries”, “Pretty Mary K”

I'm a huge Elliott Smith fan and I love this record. However, this is certainly not his best work. There are a lot of excellent songs but there is also a bit of filler, which simply doesn't exist on his earlier albums. The sound is bigger and takes away a bit of the intimacy but it works really well at points. This is still of super album, Elliott Smith has one of the best discographies out there, so give it a listen.

Loving XO I checked this out and unfortunately it just didn’t have the magic of the affor mentioned album. Figure 8 clocks in at 52 minutes and by the 30 minute mark I’d lost interest. However I stuck with it and found the best track here second to last in “ CANT MAKE A SOUND “ which is quite the cracking song.

The last completed Elliott Smith album before his death is really a companion LP to it's predecessor, Xo. It has the same slick, sound, although I do think that, Xo, is the better record. Still, it is a fine album with tracks such as, son of Sam, everything means nothing to me, and, wouldn't mama be proud. Figure 8, is a very good record, although not his best in my opinion.

His very best work in my opinion, it seemed as if Elliott was only getting better & better with each release. In Figure 8 he dives deeper in production by implementing more instruments and sounds. His vocal arrangements remind me so much of The Beatles. Entirely grateful to have found this album, as it now stands out to be my absolute favorite of all time & it never gets old.

Your feedback for Figure 8