Rated R (studio album) by Queens Of The Stone Age 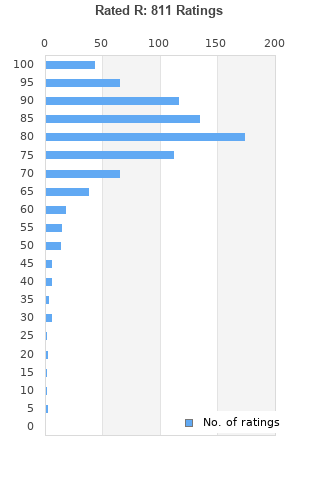 Rated R is ranked 3rd best out of 8 albums by Queens Of The Stone Age on BestEverAlbums.com.

The best album by Queens Of The Stone Age is Songs For The Deaf which is ranked number 136 in the list of all-time albums with a total rank score of 12,272. 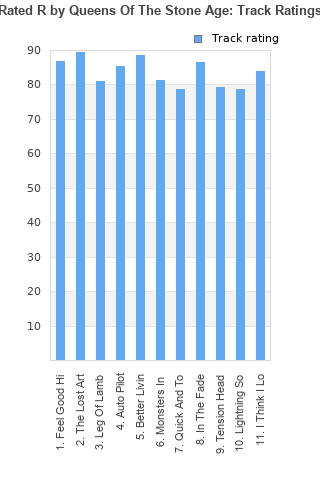 The Lost Art Of Keeping A Secret
Rating: 90 (236 votes)Comments:

Rating metrics: Outliers can be removed when calculating a mean average to dampen the effects of ratings outside the normal distribution. This figure is provided as the trimmed mean. A high standard deviation can be legitimate, but can sometimes indicate 'gaming' is occurring. Consider a simplified example* of an item receiving ratings of 100, 50, & 0. The mean average rating would be 50. However, ratings of 55, 50 & 45 could also result in the same average. The second average might be more trusted because there is more consensus around a particular rating (a lower deviation).
(*In practice, some albums can have several thousand ratings)
This album is rated in the top 2% of all albums on BestEverAlbums.com. This album has a Bayesian average rating of 80.4/100, a mean average of 79.4/100, and a trimmed mean (excluding outliers) of 80.5/100. The standard deviation for this album is 13.8.

This is the beginning of where they were honing there unique sound. Not the best of there albums at all, but it does boast two of there best ever songs, 'The Lost Art of Keeping a Secret' & 'Better Living Through Chemistry'

This is where they truly started. Looking back at their music I'd say they have a unique style, but it isn't too spcial. I'd surely use them as an example for people who keep the rock alive in the 21st century. But questions like "who did they inspire?" and "did their style have a lasting impact on mainstream music, or even just rock music?" leave me rather silent. It's a great and enjoyable style that renders a perfect alternative to the alternative. That is: the prog... err alternative... err indie rockers (get it right, they're immensely different) that were spiraling down their own assholes with the speed of light. The Queens keep it simple, and make it complex only if it enhances the experience, not to force the concept. Nonetheless, they have great concepts for their songs that justify the sound of their style, their guitars are tweaked perfectly, and the drummer does what he should. Homme's singing might be the most groundbreaking part of the formula. It's simple, it works, it rocks.

This is a great rock album. Highly recommend it.

Rated R has become an instant favorite. There is a lot of variety in the songs as well as the vocalists. Really dug this and I expect the rating to rise with more listens.

Key tracks: Feel Good Hit of the Summer, The Lost Art of Keeping a Secret, Tension Head, In the Fade, Better Living Through Chemistry.

Your feedback for Rated R