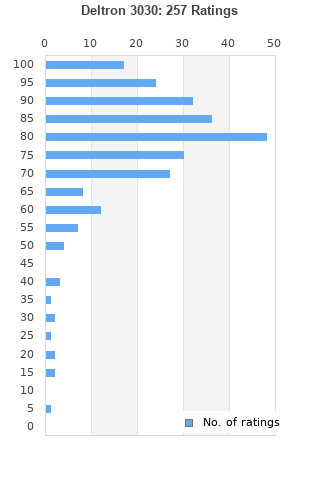 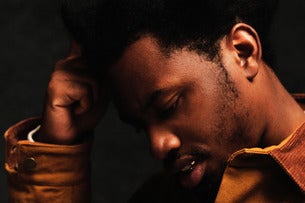 Tickets from Ticketmaster Get tickets
May
22
Sun
20:00 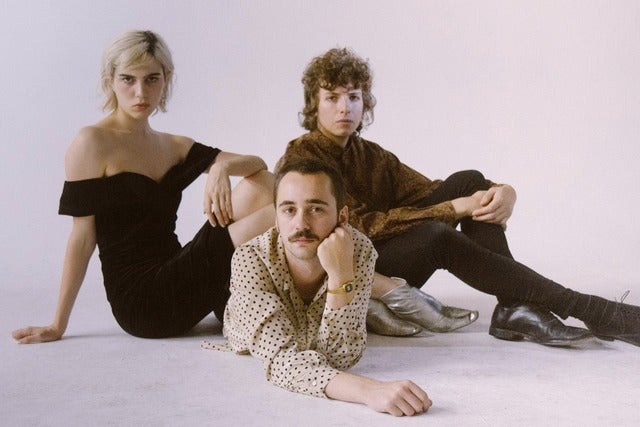 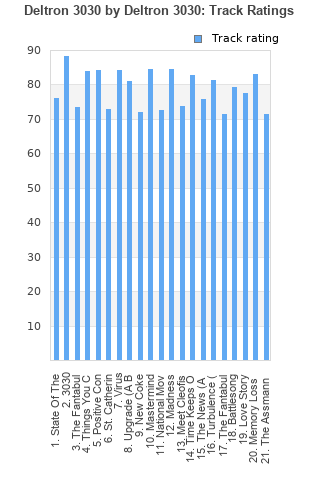 Rating metrics: Outliers can be removed when calculating a mean average to dampen the effects of ratings outside the normal distribution. This figure is provided as the trimmed mean. A high standard deviation can be legitimate, but can sometimes indicate 'gaming' is occurring. Consider a simplified example* of an item receiving ratings of 100, 50, & 0. The mean average rating would be 50. However, ratings of 55, 50 & 45 could also result in the same average. The second average might be more trusted because there is more consensus around a particular rating (a lower deviation).
(*In practice, some albums can have several thousand ratings)
This album is rated in the top 2% of all albums on BestEverAlbums.com. This album has a Bayesian average rating of 79.2/100, a mean average of 77.9/100, and a trimmed mean (excluding outliers) of 79.5/100. The standard deviation for this album is 16.8.

A perfect storm. Great and interesting concept, production is cosmic, yet never overpowers Del. It's also impressive to write a "hip hopera" of this magnitude and NOT the make the lyrics corny as hell.

First of all, there's technically just 12 songs so I don't know why I see a comment about how there's 21 tracks and it's too long lol.
This is just an epic record. Very creative. It took me a couple listens of a few tracks before I decided to plunge into the whole record. I also had to listen to I Wish My Brother George Was Here (Del the Funkee Homosapien) and 3rd Eye Vision (Hieroglyphics) before I could get started. But in the end I was not disappointed.

Hip hop supergroup Deltron 3030, consisting of MC Del the Funky Homosapien, producer exraordinaire Dan the Automator, and DJ Kid Koala, makes the case on this self-titled, post-apocalyptic concept album that hip hop has as much potential for considering possible futures as it does for expressing the gritty reality of urban life. Although Del lacks the vocal range of many of his contemporaries, he does have a gift for the clever rhyme. But it's really the complex instrumentation, attention to melody, and creative beats that make this album truly special, and among the greatest hip hop records ever made. The best track here is probably "3030," a song that swells with a full string section and a chorus of backup singers in way that transcends genre altogether. I had the privilege of seeing these guys perform live in front of a brewery in Bozeman, Montana, of all places, and it was clear to me that Deltron 3030, rather than being about posturing, is a group of artists who are fundamentally all about the music.

One of my favourite hip hop albums. So creative and catchy at the same time. Favourite songs: Virus, Turbulence and Mastermind.

Nah unfortunately I just cannot get into this album; at 21 tracks it’s way too long and by the end over stays it’s welcome

I can definitely see why a lot of people see this as a classic, but i found the flow a little bit boring, the lyrics and themes were pretty cool though! I'll give it another listen soon

My friend showed me this album last November and I have not been able to stop listening to it!

These guys throw such a good live show.. A must see.

Possibly one of the most unique hip hop albums of all time. Del nails the concept ("it's the year 3030...."), and the beats fit perfectly.

Your feedback for Deltron 3030