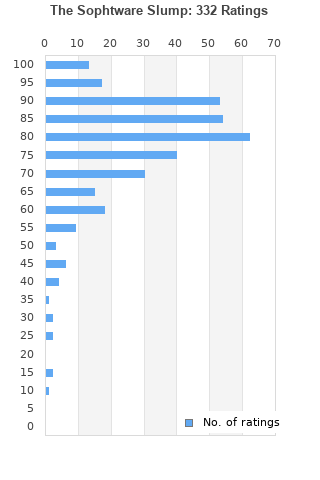 The Sophtware Slump is ranked as the best album by Grandaddy. 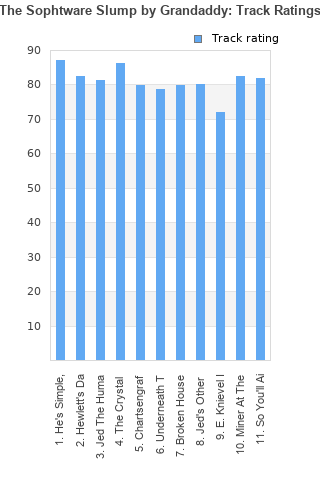 Rating metrics: Outliers can be removed when calculating a mean average to dampen the effects of ratings outside the normal distribution. This figure is provided as the trimmed mean. A high standard deviation can be legitimate, but can sometimes indicate 'gaming' is occurring. Consider a simplified example* of an item receiving ratings of 100, 50, & 0. The mean average rating would be 50. However, ratings of 55, 50 & 45 could also result in the same average. The second average might be more trusted because there is more consensus around a particular rating (a lower deviation).
(*In practice, some albums can have several thousand ratings)
This album is rated in the top 3% of all albums on BestEverAlbums.com. This album has a Bayesian average rating of 78.5/100, a mean average of 77.6/100, and a trimmed mean (excluding outliers) of 78.7/100. The standard deviation for this album is 14.6.

This album starts out very strongly with the first four tracks being my favourite on the whole record. The 8 minute opener is brilliant and is really allowed to breathe and reach its own conclusion as a song. The album then follows in the footsteps of this and creates a fantastic space rock/Otherworldly atmosphere that is very well maintained throughout. The music is very well produced and has such a unique vibe to it that can be hard to grasp on first listen but it really rewards you on repeat listens. The lyrics are very intriguing as well and give you a lot to explore outside the album and gives you a lot to ponder. However, the music can feel a little simple at times and also quite boring. It does slow down in the second half and it is missing something in certain songs that really make the music special. Overall, a great listen with interesting views and some fantastic songs to get stuck into.

Indie Rock - Space Rock
I got this Dec 18 and immediately fell in love with this album. "He's Simple" opener is a near 9 minutes of delicate excellence - a modern day version of Bowie's "Space Oddity" with the acoustic, space themed lyrics and almost a ship lift off bridge similar to Bowie's 1969 effort.
The whole album is delicate with plenty of space. On occasion they have a Flaming Lips feel.
Top tracks include "Hewletts Daughter" both "Jed" songs, "Broken Household Appliances" amongst others.

Sadly underappreciated album this one , if only it were to reach a wider audience I've no doubt it would be considered a modern classic. In my mind its a modern classic all the same

Sounds and feels like a concept album but according to Lytle isn't ('Aqualung' - esque?? )rather is a series of connected vignettes about a dystopian future where technology has failed

I understand comparisons to Ok Computer but for me that album dealt with humanity losing itself through technological advancement whereas here Jason Lytle is dealing with the aftermath where that battle is in the past and nature has reclaimed the earth. I think this is best exemplified by the songs Broken Household Appliance National Forest, where man's technological detritus is now home to the animals,
"The refrigerators house the frogs
The conduit is the hollow log"
and Miner At The Dial-A-view where the eponymous Miner is looking back at his old home from some Mining Outpost and although he finds familiar landmarks he can't find the people he knew. Often described as post apocalyptic I don't think the album gives any indication of there having been an apocalypse,it's more that progress has rendered man obsolete and now the world he built has nobody to serve and is crumbling back to the earth.

This album gets progressively better with each track. After the first 3 tracks, the Sophtware Slump literally BURSTS with a fresh form of energy! It's much more than just a copy of OK computer in my book.

Really good album...one of the best of it's decade.

The robot boy returned home from his travels full of stories he was more than willing to share with us.

An indie album by a band out of Modesto, this was their second album and it did indeed avoid the dreaded Sophomore slump. Leading off this one is the excellent "He's Simple, He's Dumb, He's the Pilot" - a track that Elliott Smith would often join in on during the tour following this album.

Your feedback for The Sophtware Slump