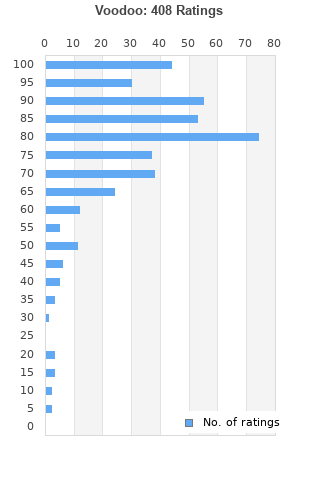 Voodoo is ranked as the best album by D'Angelo. 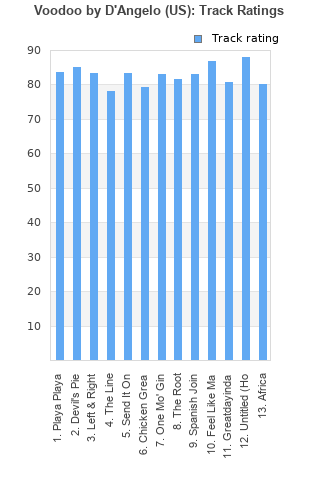 Rating metrics: Outliers can be removed when calculating a mean average to dampen the effects of ratings outside the normal distribution. This figure is provided as the trimmed mean. A high standard deviation can be legitimate, but can sometimes indicate 'gaming' is occurring. Consider a simplified example* of an item receiving ratings of 100, 50, & 0. The mean average rating would be 50. However, ratings of 55, 50 & 45 could also result in the same average. The second average might be more trusted because there is more consensus around a particular rating (a lower deviation).
(*In practice, some albums can have several thousand ratings)
This album is rated in the top 2% of all albums on BestEverAlbums.com. This album has a Bayesian average rating of 79.6/100, a mean average of 78.1/100, and a trimmed mean (excluding outliers) of 79.8/100. The standard deviation for this album is 18.0.

Fine. Just doesn't scratch any of my personal music itches. And soooo long.

Can't believe this album is rated so low. One of my favorite albums ever.

Through its 78 minute runtime, D'Angelo and his "Voodoo" mesmerizes us with sexy & elegant compositions. In fact, it somehow manages to outdo is predecessor to become the pinnacle of modern-day soul.. it really is that brilliant.

Jordborb mate you're coming over like kanye west. This site vastly favours classic cannon type stuff and white indie bands. Bit like the music press has done for decades. But there's no agenda is there? The most average white indie band will probably have more votes than some fantastic jazz record or wonderful english folk album. there's loads of genres that don't get the rep they should on here, metal for one (compared to RYM). You can't start making accusations you do then list albums by black artists that are acclaimed on this site. In fact his last album is top ten on here for the year. Thing is I can't understand how this is higher on the year chart than two absolute classics IMHO: xtrmntr and sophtware slump. So it's hardly been forgotten has it? Its just about taste, not colour. It doesn't really do much for me but if you love it then let everyone know but be careful with overly simplistic reasoning on why it's not rated higher than ok computer. I also would suggest that rolling stone is far inferior to this site on getting an idea of what's worth listening to.

I'm not one for unhesitatingly making accusations of bigotry/nepotism etc. That is unless I'm absolutely certain it's justified. This album is horrendously overlooked by this website in my opinion. It's easily one of the biggest influences on artists of the current generation in genres such as Hip Hop, R&B, Jazz etc. The name Voodoo has become so much a part of the lexicon of modern musicians that it deserves to be revered on a similar level to the likes Madvillainy, MBDTF, Illmatic and possibly even the two Kendrick albums.

3 years of recording in the making, this is one of the most perfectly engineered albums you'll ever hear, with every layer of sound recorded to perfection. And there are many layers, sometimes even up to 5 reals of tape were used on single tracks such as 'The Root', most of which where made up of the repeated takes of D'Angelo's voice harmonising with itself at least a dozen times over (none of which would ever be erased). Yet somehow despite the density of the recordings, it remains one of the most delicate and dynamic sounding albums you'll ever hear. And the delicacy is galvanised by the crazy and unsteady-yet-perfect grooves provided by the drum and bass pairing of ?uestlove and Pino Palladino, a match made in heaven.

Unfortunately this leads me to conclude that this website has something of a bias against some black musicians. I'm not saying that I think Radiohead, The Beatles, Led Zeppelin, Pink Floyd etc probably wouldn't be right at the top of the all time greatest artists list if you're asking hardcore music fans, but I also don't think this website is as meritocratic as it could be based on how overlooked an album like this can be. There's even a Linkin Park album that came out in the same year that is ranked higher ffs.

It's unfortunate that this album somehow didn't find the place it deserves in the critical canon, even if you do find it in the Rolling Stone top 500 list, you won't see anywhere near the same reverence for this album given by critics as you will find given by the relevant musicians of today (including the likes of Solange, James Blake and Thundercat, not to mention the countless many more who have sampled this album to death).

Anyways, rant over, please don't feel pressured to agree, this is just what's currently on my mind whenever I see this album on this website.

My least favorite of D'Angelo's three albums, it's sexy but repetitive, and lacks the emotion of Brown Sugar or the quirkiness of Black Messiah. It's likely just a matter of taste though.

VOODOO IS THE REASON WHY I LOVE MY HEART AND EARS!
Almost nothing compares to it's high-mindedness!

Your feedback for Voodoo