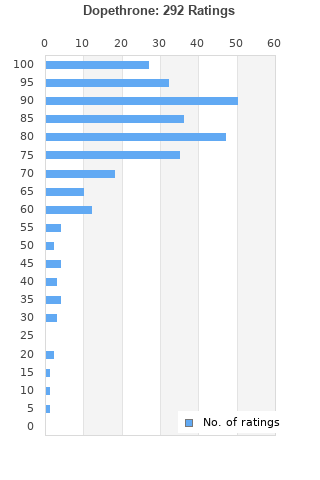 Dopethrone is ranked as the best album by Electric Wizard. 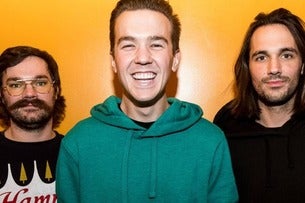 Tickets from Ticketmaster Get tickets
May
24
Tue
19:00 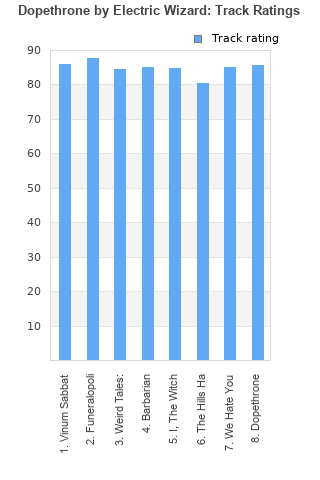 Rating metrics: Outliers can be removed when calculating a mean average to dampen the effects of ratings outside the normal distribution. This figure is provided as the trimmed mean. A high standard deviation can be legitimate, but can sometimes indicate 'gaming' is occurring. Consider a simplified example* of an item receiving ratings of 100, 50, & 0. The mean average rating would be 50. However, ratings of 55, 50 & 45 could also result in the same average. The second average might be more trusted because there is more consensus around a particular rating (a lower deviation).
(*In practice, some albums can have several thousand ratings)
This album is rated in the top 2% of all albums on BestEverAlbums.com. This album has a Bayesian average rating of 80.4/100, a mean average of 79.5/100, and a trimmed mean (excluding outliers) of 80.7/100. The standard deviation for this album is 17.3.

Think early Sabbath but with a lot slower tempo and down tuned instruments. There's a more foreboding feel to it. I love hard rock/metal, it's my preferred genre. There's some great tracks on this but even I find it a bit monotonous when listening to the whole album in one sitting. This is heavy shit. Deep sludge.

This album is so heavy with its noise that it feels like it is weighing you down. It sounds apocalyptic and they are really good at engulfing you in this end of the world atmosphere. They take their time to develop their songs as well which is successful on some tracks but weaker on others. Where this album really shines is the riffs which are simply phenomenal and this album is well worth a listen just because of them. They really carry the album in my opinion. The record does struggle in places like the vocal which does get a bit tiresome and irritating by the last few tracks. Also, some songs are too elongated and could really conclude a lot earlier than they do. It is too much of a bloated release as well with there being quite a lot of filler you could remove. Overall, an album with a few flaws but those riffs do draw me back to this record quite a bit.

I like it very much interesting is the hidden track Mind Transferal where you can hear silence for 5 minutes. What the lyrics are I must just look for them so I can understand what is said. But it feels like floating in water but Black Sabbath is number . This reminds me a little bit of stoner rock I like the amazing bass like my head is humming and it won‘t go.

This platter is a nifty lil toe tapper. Just right to enjoy with a glass of mineral water (with honey) in a warm bath.

Metal is not a genre that I listen to and like a lot but I have to talk about "Dopethrone". In this album, Electric Wizard gives the best of their hate. See the speech of the trio: the world is bad, we are constantly threatened by a nuclear war, it is despair. A solution to that? The drugs, of course. A lot of drugs. A bit like an evil version of the Doors, Electric Wizard only thinks of delivering the Chtonian deities. Dopethrone is their masterpiece, classic of the genre, mixing the slowness and heaviness of an apocalyptic Doom and the Stoner (Hard groovy rock) as Black Sabbath could do. The guitar riffs are all exellent, it's the black magic of Electric Wizard. I will never get tired of hearing each riffs which are really anthological. This kind of record that tells you that nothing is worth it, in hate and bad mood.

Great, slow, ultra heavy and massively sludgy riffmonster music, but with almost intolerably overproccesed vocals. It's like taking the best of early Sabbath and putting Ozzy on a defective autotune.

It put hair on my balls

Heavy Heavy Heavy, best played in the car on 11 . Even if metals not your thing do check this out . It will rattle your bones and blow out the cobwebs

So nasty, so heavy, so slow, sooooooooo gooooood!!!!

I have not listened to a metal album this chill before