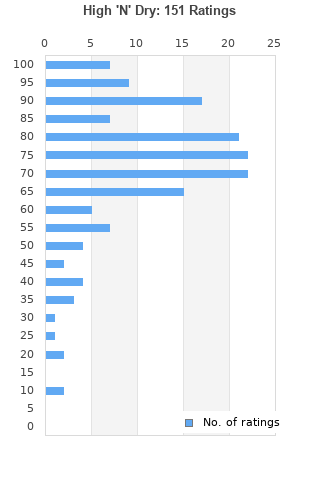 High 'N' Dry is ranked 3rd best out of 19 albums by Def Leppard on BestEverAlbums.com.

The best album by Def Leppard is Hysteria which is ranked number 535 in the list of all-time albums with a total rank score of 3,491. 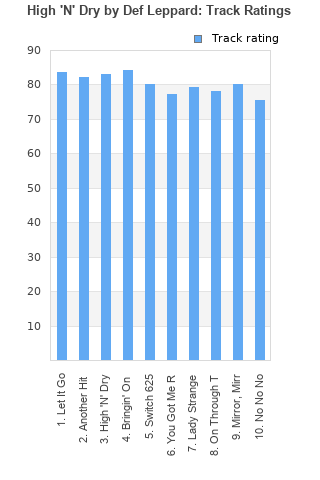 Rating metrics: Outliers can be removed when calculating a mean average to dampen the effects of ratings outside the normal distribution. This figure is provided as the trimmed mean. A high standard deviation can be legitimate, but can sometimes indicate 'gaming' is occurring. Consider a simplified example* of an item receiving ratings of 100, 50, & 0. The mean average rating would be 50. However, ratings of 55, 50 & 45 could also result in the same average. The second average might be more trusted because there is more consensus around a particular rating (a lower deviation).
(*In practice, some albums can have several thousand ratings)
This album has a Bayesian average rating of 72.7/100, a mean average of 71.8/100, and a trimmed mean (excluding outliers) of 72.7/100. The standard deviation for this album is 18.7.

By far Leppard's best album. It all came together for them while still in the hard rock / NWOBHM stage. 'Let it Go' an all time metal classic. Great from start to finish barring a couple of very minor speed bumps. One of the great albums from the NWOBHM heyday. All downhill after this as they went more commercial.

Better than decent. Excellent from start to finish. Mutt with just the right amount of polish. This is their best line up and sound by a mile with superb moments from the two guitar players. More hard rock than pop and a sound evolved and improved on from the debut with better songs and arrangements. They evolved again on the next but lost a key man and mutt tweaked that polish button and they headed towards the bank of arena pop rock.

I used to own this album back in the day as a kid who listened to hair metal. I don't think I played it much as I don't remember too much about it, maybe the odd thing, bringing on the headache and the great instrumental track. It does sound decent now though, a good nwobhm record, I guess I wouldn't want to listen to what came after this nowadays, when mutt Lange produced them within an inch of their lives and they became cheesy.

Def Leppard's best album, easily. This record just had such a good flow to it, there's a real mood with the song placement unlike Leppard's other albums, I love almost every song by Leppard but having them thoughtfully put together on this record just adds to their enjoyment, something I wish their other albums had. A real underrated classic here though.

Great album. Mutt Lange starts to define Def Leppard's sound, which becomes solidified on Pyromania. Great ballad in Bringin on the Heartbreak, and some great songs in Lady Strange, You Got Me Runnin', Let it Go, High N Dry (Saturday Night), and the instrumental Switch 625.

Your typical 80's Rock album with a ballad thrown in 'Bringin' On the Heartbreak' a very listenable rock album.

Tap the keg!!! The second best hard rock PARTY album of all time! And seriously, aren't we all bored of Back in Black by now? Variety, people.

For Def leppard fans, this will be a good listen. But they sound just like any other average rock band overall in this one. The production was a little bad until Bringin' on the Heartbreak where the better production started picking up.

A superior album to On Through the Night on the strength of a higher number of go to tracks (four compared to two). Still fairly straight middle of the road hard rock that will not fool anyone as to which decade it is from.

Your feedback for High 'N' Dry