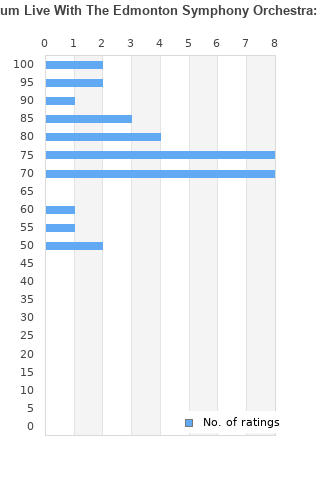 Procol Harum Live Edmonton Symphony Orchestra psych rock LP VINYL ALBUM
Condition: Used
Time left: 11h 28m 7s
Ships to: Worldwide
$27.00
Go to store
Product prices and availability are accurate as of the date indicated and are subject to change. Any price and availability information displayed on the linked website at the time of purchase will apply to the purchase of this product.  See full search results on eBay

Procol Harum Live With The Edmonton Symphony Orchestra is ranked 10th best out of 17 albums by Procol Harum on BestEverAlbums.com.

The best album by Procol Harum is A Salty Dog which is ranked number 1627 in the list of all-time albums with a total rank score of 1,059. 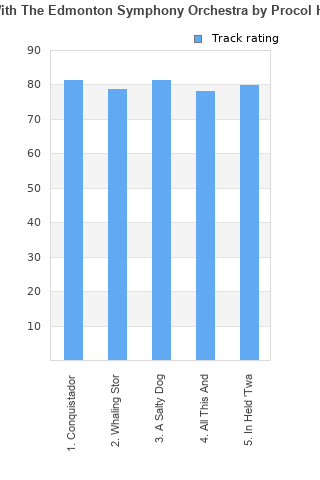 0
5.
In Held 'Twas In I (Comprising: Glimpses Of Nirvana, 'Twas Teatime At The Circus, In The Autumn Of My Madness, I Know If I'd Been Wiser, Grand Finale)
Rating: 80 (9 votes)Comments:

Rating metrics: Outliers can be removed when calculating a mean average to dampen the effects of ratings outside the normal distribution. This figure is provided as the trimmed mean. A high standard deviation can be legitimate, but can sometimes indicate 'gaming' is occurring. Consider a simplified example* of an item receiving ratings of 100, 50, & 0. The mean average rating would be 50. However, ratings of 55, 50 & 45 could also result in the same average. The second average might be more trusted because there is more consensus around a particular rating (a lower deviation).
(*In practice, some albums can have several thousand ratings)
This album is rated in the top 19% of all albums on BestEverAlbums.com. This album has a Bayesian average rating of 74.8/100, a mean average of 75.4/100, and a trimmed mean (excluding outliers) of 75.4/100. The standard deviation for this album is 11.6.

Perhaps the best love album of all time, this record is amazingly orchestrated and performed by all involved. Side A of this album features 4 classic songs from the first four albums (minus Shine On Brightly, which is represented on side B). The first song is the one that benefits most from the orchestral upgrade, ‘Conquistador’, a brilliant rock song turned into one of the groups best ever tracks by amazing arrangement. Track 2 ‘Whaling Stories’ is another track that is improved by the arrangement, it almost sounds like it was written with an orchestra in mind.

The first two tracks are great songs turned brilliant by the orchestra, but the next track, ‘A Salty Dog’, was already performed with an orchestra on the album it came from, so this rendition isn’t much different, but Brooker’s vocals here make it a bit stronger than the album track. The final song on side A is perhaps the albums biggest misstep, ‘All This and More’, a song that I like more than any of the others chosen for side A of the album, but also a song that didn’t need an orchestral backing, so it’s place on this album is questionable. Of course the song is still good, but it isn’t really improved much if at all.

Side B consists of only one track, the prog rock epic, ‘In Held Twas In I’, my favourite Procol Harum song. The song was, in it’s origional form, 17 minutes long, whilst this rendition is nearly 20 minutes and is still a joy to listen to. The song is fantastic, of course, and is just as good here as it origionally was, the albums best.

Overall, this is one of Procol Haurm’s best, and one of, if not the very best non-studio album of all time.

Very Underrated. One of the best live albums ever.

Your feedback for Procol Harum Live With The Edmonton Symphony Orchestra