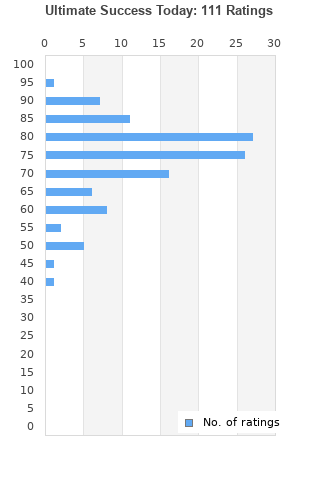 Protomartyr Ultimate Success Today LP sealed vinyl + mp3 download
Condition: New
Time left: 2d 12h 59m 33s
Ships to: Worldwide
$22.00
Go to store
Product prices and availability are accurate as of the date indicated and are subject to change. Any price and availability information displayed on the linked website at the time of purchase will apply to the purchase of this product.  See full search results on eBay

Ultimate Success Today is ranked 3rd best out of 5 albums by Protomartyr on BestEverAlbums.com.

The best album by Protomartyr is Relatives In Descent which is ranked number 2509 in the list of all-time albums with a total rank score of 624. 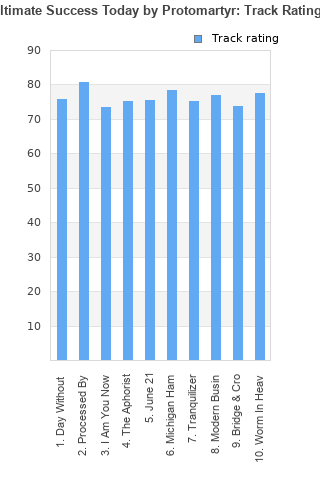 Rating metrics: Outliers can be removed when calculating a mean average to dampen the effects of ratings outside the normal distribution. This figure is provided as the trimmed mean. A high standard deviation can be legitimate, but can sometimes indicate 'gaming' is occurring. Consider a simplified example* of an item receiving ratings of 100, 50, & 0. The mean average rating would be 50. However, ratings of 55, 50 & 45 could also result in the same average. The second average might be more trusted because there is more consensus around a particular rating (a lower deviation).
(*In practice, some albums can have several thousand ratings)
This album is rated in the top 26% of all albums on BestEverAlbums.com. This album has a Bayesian average rating of 74.4/100, a mean average of 74.2/100, and a trimmed mean (excluding outliers) of 74.5/100. The standard deviation for this album is 9.9.

Alright. I can tell the musicians are talented but it doesn't seem like too much thought was put into these. Just seems like some talented musicians improvising until they got some decent sounding songs. It comes off as stale to me.

I always like and listen to Protomartyr records, waiting for them to blow me away. This is the one that has come the closest. I'm all for the moodiness and intensity here. Definitely one of the more underrated records of 2020.

Some basic ideas that never became fully formed songs. Not my thing

Such a cool band. This album doesn't disappoint. First track is one of those slow building songs which plays as a nice ramp up to their killer single Processed by the Boys. This release is just as cool as their older stuff but with a continuous spooky wind instrument type thing going on throughout. Dig it so much!

Your feedback for Ultimate Success Today