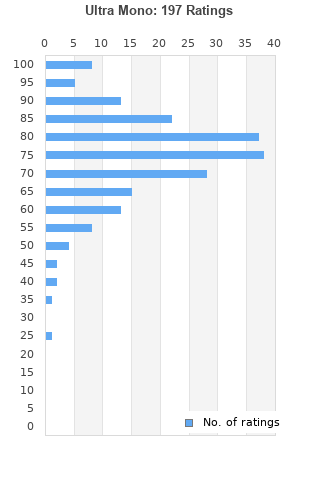 Idles Ultra Mono Edition Rare Crystal Clear Vinyl Records LP Album Limited
Condition: New
Time left: 14h 43m 25s
Ships to: Worldwide
£39.97
Go to store
Product prices and availability are accurate as of the date indicated and are subject to change. Any price and availability information displayed on the linked website at the time of purchase will apply to the purchase of this product.  See full search results on eBay

Ultra Mono is ranked 3rd best out of 5 albums by Idles on BestEverAlbums.com.

The best album by Idles is Joy As An Act Of Resistance. which is ranked number 623 in the list of all-time albums with a total rank score of 3,029. 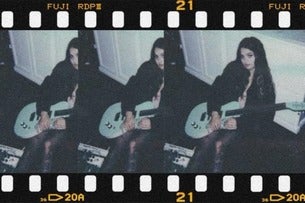 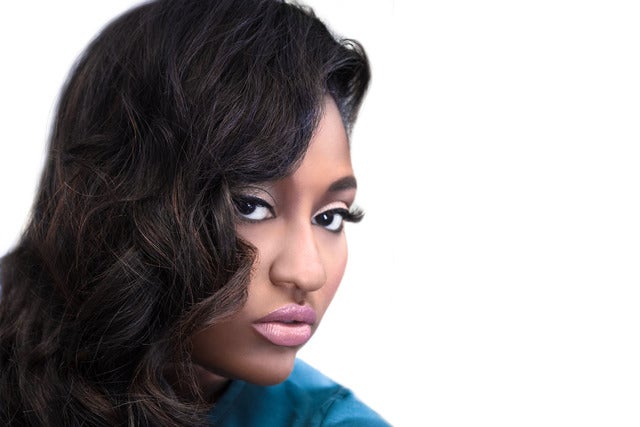 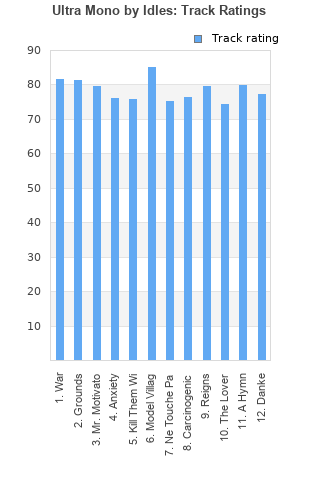 Rating metrics: Outliers can be removed when calculating a mean average to dampen the effects of ratings outside the normal distribution. This figure is provided as the trimmed mean. A high standard deviation can be legitimate, but can sometimes indicate 'gaming' is occurring. Consider a simplified example* of an item receiving ratings of 100, 50, & 0. The mean average rating would be 50. However, ratings of 55, 50 & 45 could also result in the same average. The second average might be more trusted because there is more consensus around a particular rating (a lower deviation).
(*In practice, some albums can have several thousand ratings)
This album is rated in the top 18% of all albums on BestEverAlbums.com. This album has a Bayesian average rating of 74.8/100, a mean average of 74.9/100, and a trimmed mean (excluding outliers) of 74.9/100. The standard deviation for this album is 11.8.

Good sounds but I can't stand the lyrics for the most part. I wish I didn't speak english so I could enjoy this album. Comes off as corny to me and lacks subtlety.

Maybe just with old age but I've been become averse to the modern cram-it-down throat messaging, especially in these interconnected gotta-make-a-statement days, but the special intensity of Idles music made their spray-it-on-the-eyes lyrical approach and odd, sometimes clunky rhyming patterns feel rather necessary. But now... eh. The comparitively milquetoast sound not only makes this feel like a rather lumbering and frequently dis-engaging record, but now their message really just starts to feel like sermonizing pap. Not that the actual message is bad at all, just that it starts to (perhaps unintentionally) feel both tedious and rather forced when backed by these rather forgettable and incredibly mild-by-Idles-standards arrangements. A major dissapointment.

Not really my thing, but lyrically, one of the most interesting punk records in a long while. Plus, the production and performances are next level great.

Idles third record here hits a plentiful amount of times, but ditches it’s post-hardcore roots for something more refined and straightforward and sometimes it comes off as engaging “War” “Grounds” and “Danke” as an engaging send-off. As well, the big standout here is “Model Village” which stands as the catchiest, wittiest, and closest to excubersting the energy from their last record. Other cuts are decent, even if the instrumentation is cut back, especially with the drum work on this record. Other songs simple lyrical approach though come off as weak and lazy, especially considering the themes have been discussed in a more poetic and contextual way in their last record. Generally, I think this is a good album, but I do think there is a lot of weak points here. Luckily enough, the good outweighs it, but IDLES most definitely needs to regain the spark and rebellious energy they had on their previous efforts.

Sept20. 'War' is a pretty cool start here. The opening lines of the album aren't quite as venomous, but still remind me of 'Knives' by Therapy? that kicks of Troublegum.
I thought I would find the electronic elements of 'Grounds' annoying, but this song just has so much impact, despite its very minimal sound. How good is the bass in 'Mr Motivator'? And the guitars remind me of a band like Biffy Clyro. I am sure a lot of people can relate to 'Anxiety' right now. I love the title and the phrase used as the chorus in 'Kill Them With Kindness'. I love how IDLES are able to express the things that need addressing in the world, but their response is not hate or violence. They do this well on 'The Lover' too.
'Carcinogenic' and 'Reigns' also pick up on what is wrong with the world. 'Model Village' is pure genious and will be joining fellow Brits, Massive Wagons, at the top of my H100 for 2020. The message of consent in 'Ne Touche Pas Moi' is very well made. I especially love the lines about people's 'dance space'.
'A Hymn' is quite haunting, but again, another song a lot of people can relate to and 'Danke' is a solid finish, though I reckon the album could have ended with 'A Hymn'. This is good stuff. The music is not predicatible and the lyrics totally relatable. 5/5

How can something so loud sound so beautiful. In a world where there is so much bland and colourless music this album (and their previous one) deserves to be heard. This is a raw and wonderful explosion of emotion. Finally a band creating music worthy of the term 'breathtaking'.

The Quietus don’t like IDLES, so eager were the noise-drone-loving-blur-hating online UK equivalent of Pitchfork that they published their review of the new record a month early. They hated it. The most exciting band in the UK and they were found with their pants round their ankles. It seems the august journal have decided that what the kids need are badly recorded rip offs of Metal Machine Music. What’s that? Fun?! Don’t be so vulgar.
The record is of course fine, although not quite as as good as Joy but it does include 12 reasons why 2020 won’t quite be remembered why rock’n’roll curled up & died. Fuck ‘em.

Your feedback for Ultra Mono