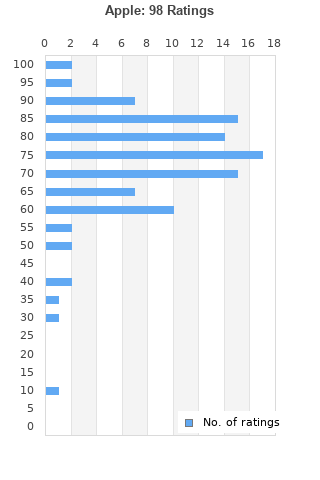 Apple is ranked as the best album by Mother Love Bone. 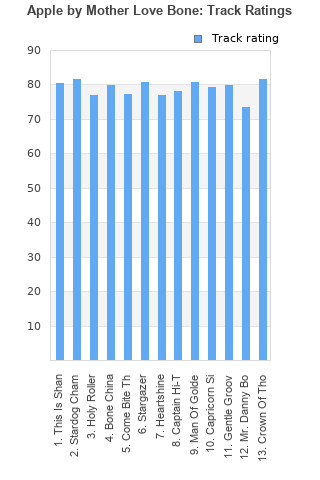 Rating metrics: Outliers can be removed when calculating a mean average to dampen the effects of ratings outside the normal distribution. This figure is provided as the trimmed mean. A high standard deviation can be legitimate, but can sometimes indicate 'gaming' is occurring. Consider a simplified example* of an item receiving ratings of 100, 50, & 0. The mean average rating would be 50. However, ratings of 55, 50 & 45 could also result in the same average. The second average might be more trusted because there is more consensus around a particular rating (a lower deviation).
(*In practice, some albums can have several thousand ratings)
This album has a Bayesian average rating of 73.8/100, a mean average of 73.2/100, and a trimmed mean (excluding outliers) of 73.9/100. The standard deviation for this album is 14.7.

This album's got very top moments. Unfortunately, sometimes it loses the spark and becomes a bit repetitive. Still a very good one, though.

Not nearly as alternative as I was expecting but no less fun because of it.

Before Pearl Jam, there was Mother Love Bone.

Fronted by flamboyant singer Andrew Wood who died shortly before the scheduled release of "Apple", Mother Love Bone was a part of the local Seattle scene. They had that something extra that led them to be the first local band to sign with a major label.

"Apple" has an amazing aura and a timeless quality to it. The influence of Led Zeppelin and Aerosmith can be felt throughout this album. Songs here range from hard hitting to gentle melodies. Not only are the vocals amazing, but the lyrics too.

Rock doesn't get much better than this. The solo on "Stardog Champion" will blow your F***ing mind. "Capricorn Sister" is an all time classic. "Man of Golden Words" and "Stargazer" show a deep emotional and spiritual side through mellon collie. Mother Love Bone would've been the next Led Zeppelin but were never given the chance. R.I.P Andy Wood.

Great album, you can hear what was to follow. Favs; Stardog champion, Capricorn sister, Crown of thorns.

Andy Wood was great, but at the same time his death gave rise to my favorite band of all time so feelings are mixed. Either way this was a pretty good album.

Your feedback for Apple