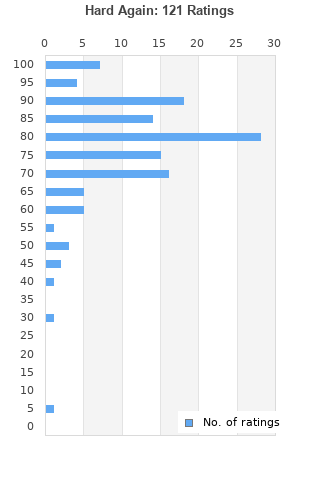 Hard Again is ranked 4th best out of 34 albums by Muddy Waters on BestEverAlbums.com.

The best album by Muddy Waters is Folk Singer which is ranked number 2380 in the list of all-time albums with a total rank score of 668. 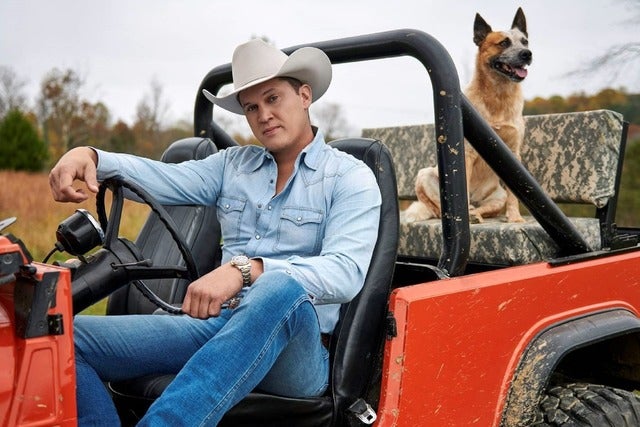 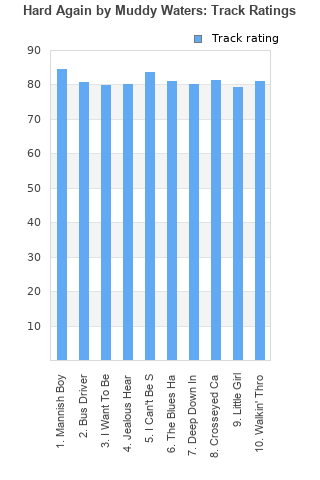 Rating metrics: Outliers can be removed when calculating a mean average to dampen the effects of ratings outside the normal distribution. This figure is provided as the trimmed mean. A high standard deviation can be legitimate, but can sometimes indicate 'gaming' is occurring. Consider a simplified example* of an item receiving ratings of 100, 50, & 0. The mean average rating would be 50. However, ratings of 55, 50 & 45 could also result in the same average. The second average might be more trusted because there is more consensus around a particular rating (a lower deviation).
(*In practice, some albums can have several thousand ratings)
This album is rated in the top 3% of all albums on BestEverAlbums.com. This album has a Bayesian average rating of 78.3/100, a mean average of 77.7/100, and a trimmed mean (excluding outliers) of 78.8/100. The standard deviation for this album is 14.8.

just another drop in the history of Delta blues legend

A comeback album for Muddy Waters. Hard again, is an enjoyable blues LP recorded with the likes of Johnny Winter. It's great that it manages to keep a raw edge to it so it doesn't sound to slick. Mannish boy, is obviously the standout but there are plenty of other great tracks on offer. Enjoyable.

This was a very solid comeback album for Muddy Waters. He's backed here by a bunch of blues legends: Johnny Winter on guitar, James Cotton on harmonica, and Pinetop Perkins on piano, among others.
For many people, "Mannish Boy" was their introduction to the blues. It was definitely one of first blues songs I heard. Willie Dixon wrote the song, but Muddy's version was the best. He recorded the song several times, and this is a very good version. I believe Muddy had also previously recorded "I Can't Be Satisfied", but this version is outstanding. I really like "Crosseyed Cat" and "Bus Driver" as well.

A legend at work. Mannish Boy is a Willie Dixon song but Waters steals it here for all time. The Blues Had a Baby is big fun as is Little Girl. This is a legend refusing to act his age. The true centerpiece, then, might be I Can't be Satisfied. Waters digs deep into his chest to sing that chorus. It sticks in your mind forever, easily on par with other timeless readings of that same sentiment by the Stones and the Replacements.

This album (PZ 34449) was a really big album(for a blues album)in 1977..it came out of nowhere and remained a big catalogue album for Columbia who distributed it.

"Mannish Boy" is the song that made me fall in love with the blues. The first 30 seconds as they're warming up and then Johnny Winter yelling in the background all throughout the song as he's trying to goad Muddy on ... it sounds like they KNEW they were onto something hot and everyone was working on all cylinders. Fantastic song and a great album.

Your feedback for Hard Again