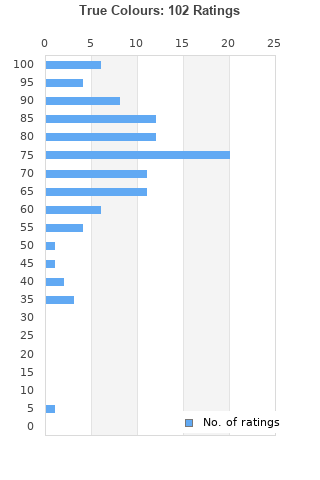 Split Enz ‎True Colours’ RARE NM LPM SP-4822 Etched Purple 1st US Press 1980
Condition: Used
Time left: 14h 40m 51s
Ships to: Worldwide
$22.99
Go to store
Product prices and availability are accurate as of the date indicated and are subject to change. Any price and availability information displayed on the linked website at the time of purchase will apply to the purchase of this product.  See full search results on eBay

True Colours is ranked as the best album by Split Enz. 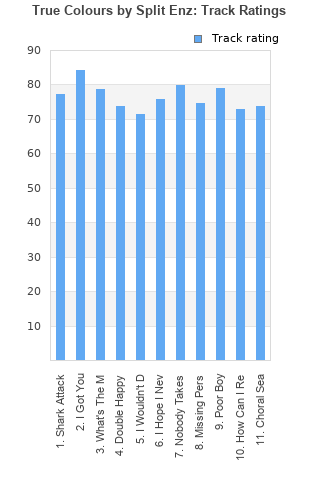 Rating metrics: Outliers can be removed when calculating a mean average to dampen the effects of ratings outside the normal distribution. This figure is provided as the trimmed mean. A high standard deviation can be legitimate, but can sometimes indicate 'gaming' is occurring. Consider a simplified example* of an item receiving ratings of 100, 50, & 0. The mean average rating would be 50. However, ratings of 55, 50 & 45 could also result in the same average. The second average might be more trusted because there is more consensus around a particular rating (a lower deviation).
(*In practice, some albums can have several thousand ratings)
This album is rated in the top 24% of all albums on BestEverAlbums.com. This album has a Bayesian average rating of 74.5/100, a mean average of 73.9/100, and a trimmed mean (excluding outliers) of 74.7/100. The standard deviation for this album is 16.0.

A beautiful album capturing the best of Split Enz with a diverse range of music and subject matter.

I received this Record for Christmas 1980 & it was one of the first Records I ever owned. And naturally I listened to it to death , even when the inevitable scratches and jumps appeared ( do you ever hear a song today that used to “skip” due to a record crack back in the day & you still hear the skip part ? ). Now the interesting thing about this particular record was it was a True Colours Laser Etched Editon meaning when you held the LP up to the light you could see lots if cool colours shimmering. This was the album that broke Split Enz from a quirky NewZeland group to mainstream stardom in Australia on the back of the number 1 smash I Got You “ which remains an all time fave song, ONLY Neil Finn can pull this song off in the correct vocal harmonies. It’s very difficult to replicate. Unfortunately True Colours is not a consistent album with many filler moments including 2 instrumentals . Their follow up album “ Corroboree” in 1981 is a much better release but that my friends is a story for another day.....

True Colours isn’t my favourite Split Enz album; the lack of detail and personality compared to some of their other work makes it a middle of the pack Split Enz album, and the hits are its most notable feature. But it provided a group that needed success with record sales, and the hits hold up well.

A shining, wonderful album. A personal discovery for me as a kid, and a private treasure.

If the Enz were New Zealand's version of The Beatles then this is surely their finest moment with commercial sensibilities that outweigh the artistic achievement of 'Mental Notes'.

Your feedback for True Colours