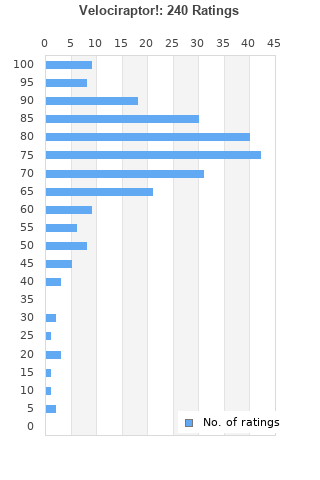 Velociraptor! is ranked 3rd best out of 9 albums by Kasabian on BestEverAlbums.com.

The best album by Kasabian is West Ryder Pauper Lunatic Asylum which is ranked number 1016 in the list of all-time albums with a total rank score of 1,834. 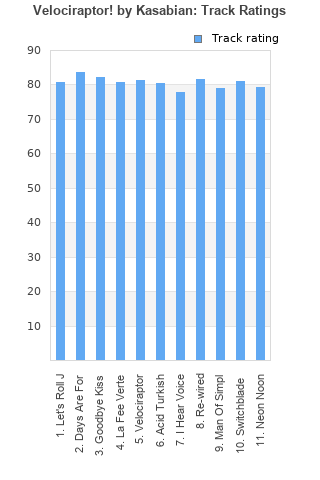 Rating metrics: Outliers can be removed when calculating a mean average to dampen the effects of ratings outside the normal distribution. This figure is provided as the trimmed mean. A high standard deviation can be legitimate, but can sometimes indicate 'gaming' is occurring. Consider a simplified example* of an item receiving ratings of 100, 50, & 0. The mean average rating would be 50. However, ratings of 55, 50 & 45 could also result in the same average. The second average might be more trusted because there is more consensus around a particular rating (a lower deviation).
(*In practice, some albums can have several thousand ratings)
This album is rated in the top 25% of all albums on BestEverAlbums.com. This album has a Bayesian average rating of 74.4/100, a mean average of 72.6/100, and a trimmed mean (excluding outliers) of 74.5/100. The standard deviation for this album is 17.5.

Not mind blowing but a consistent and decent album.

I disagree with RockyRacoon. This is the first Kasabian album I listen to and I love their psychedelic sound and most of the songs are solid.

Solid album. Doesn't reach Asylum or 48:13 level, but has plenty to enjoy. Specially strong in the beginning, the first songs are all great, the last songs are kinda weak though.

Kasabian can´t stop to surprise, great album , powerful, great song, great work, I´m thinking about puting this albums in the top of my favorites albums from this decade, I hope, It´s very clear, the variety of sounds is very notable, well, in few words, an incredible album

f there’s one thing Kasabian has been known for doing, it’s pumping out mediocre albums. They have a good sound, there’s no denying that. However all of the albums they’ve put out so far have drawn a rousing “meh" from critics. This album is no different. It has it’s moments. Moments where some songs sound pretty good. But nothing on the album is great, nothing will floor you. It’s a decent album overall and if you happen to be a fan of Kasabian you’ll probably like this album as it sounds just like their other two albums. However if you’re like me, you’ll probably walk away from this album with a very lukewarm feeling.

Great album! Their best by far. Get better every single album, which is rare.

hairymarx1: They're evolving into a strange beast indeed :P

A brilliant album and the velociraptor tour was unreal!

Your feedback for Velociraptor!