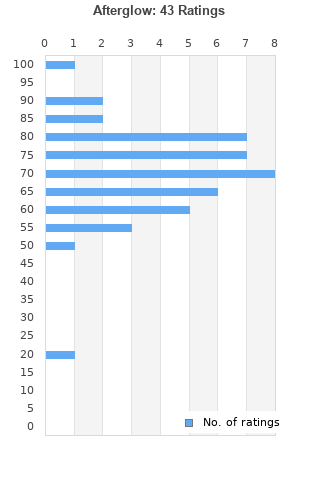 Afterglow is ranked 3rd best out of 17 albums by Sarah McLachlan on BestEverAlbums.com.

The best album by Sarah McLachlan is Fumbling Towards Ecstasy which is ranked number 2725 in the list of all-time albums with a total rank score of 564. 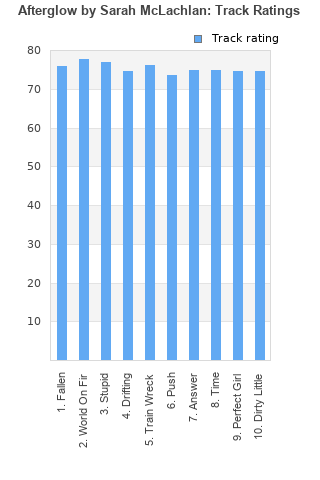 Rating metrics: Outliers can be removed when calculating a mean average to dampen the effects of ratings outside the normal distribution. This figure is provided as the trimmed mean. A high standard deviation can be legitimate, but can sometimes indicate 'gaming' is occurring. Consider a simplified example* of an item receiving ratings of 100, 50, & 0. The mean average rating would be 50. However, ratings of 55, 50 & 45 could also result in the same average. The second average might be more trusted because there is more consensus around a particular rating (a lower deviation).
(*In practice, some albums can have several thousand ratings)
This album has a Bayesian average rating of 71.8/100, a mean average of 70.2/100, and a trimmed mean (excluding outliers) of 71.5/100. The standard deviation for this album is 13.2.

Good album but certainly not in the same class as, solace, and, fumbling towards ecstasy, or even, surfacing. To be honest, it's almost Sarah Mclachlan by numbers, but it's still very enjoyable though.

There's only a certain amount of time you can wait for an album and still be excited about it. In 1998, 1999, 2000, sure, I really was really stoked on the idea of another Sarah McLachlan album. But in 2003, not so much. Either way, when this finally came out I picked it up and it's actually okay, kind of the same thing as Surfacing. It's not the leap forward you'd expect though.