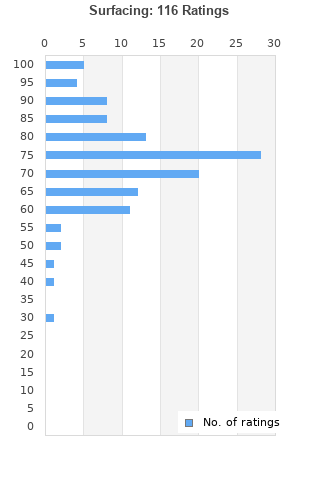 Surfacing is ranked 2nd best out of 17 albums by Sarah McLachlan on BestEverAlbums.com.

The best album by Sarah McLachlan is Fumbling Towards Ecstasy which is ranked number 2721 in the list of all-time albums with a total rank score of 565.

The Happy Fits: Under The Shade Of Green Tour
The Masquerade - Heaven, Atlanta, United States. 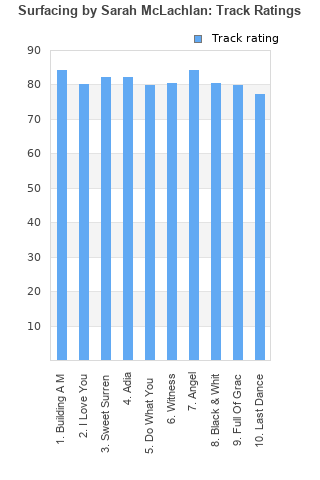 Rating metrics: Outliers can be removed when calculating a mean average to dampen the effects of ratings outside the normal distribution. This figure is provided as the trimmed mean. A high standard deviation can be legitimate, but can sometimes indicate 'gaming' is occurring. Consider a simplified example* of an item receiving ratings of 100, 50, & 0. The mean average rating would be 50. However, ratings of 55, 50 & 45 could also result in the same average. The second average might be more trusted because there is more consensus around a particular rating (a lower deviation).
(*In practice, some albums can have several thousand ratings)
This album is rated in the top 16% of all albums on BestEverAlbums.com. This album has a Bayesian average rating of 74.7/100, a mean average of 74.5/100, and a trimmed mean (excluding outliers) of 74.9/100. The standard deviation for this album is 12.4.

Good album. Not quite as brilliant as, solace, and, fumbling towards ecstasy, but fine songs here, especially, Adia, which has got to be Mcclachlan's greatest composition. Absolutely beautiful, and the rest isn't bad either.

Knew I had grown up when I heard this album

It's funny: Canadian artists usually hone their craft in Canada, unknown to the big market south of the border. They usually peak right before going stateside, and then release a huge album that catches fire in the charts. Funny thing, it's not usually their best. (See Barenaked Ladies - Gordon is better than Stunt, or Shania Twain - Woman in Me is better than Come on Over) Surfacing is a great album. Sarah McLachlan's vocals soar, her songwriting is solid, and there are memorable melodies and hooks. She is feeling confident and it sounds that way. It's a great album. It's just that Fumbling Towards Ecstasy is better.

This was her biggest hit album, it's about on par with Fumbling Towards Ecstacy in terms of quality. More diverse and such.

Totally partial to this album as it accompanied the first kiss of a very significant relationship, to the song "I Love You" - how perfect is that! Anyway, I still think the music is quite alright dear.

Your feedback for Surfacing