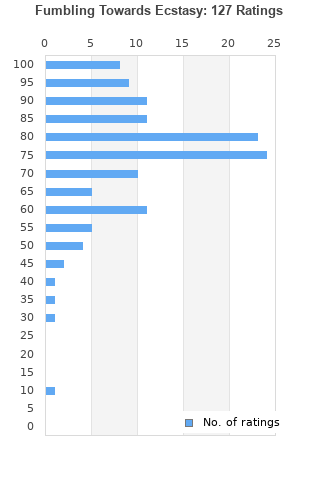 Fumbling Towards Ecstasy is ranked as the best album by Sarah McLachlan. 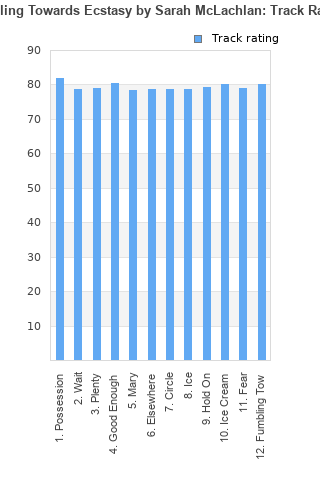 Rating metrics: Outliers can be removed when calculating a mean average to dampen the effects of ratings outside the normal distribution. This figure is provided as the trimmed mean. A high standard deviation can be legitimate, but can sometimes indicate 'gaming' is occurring. Consider a simplified example* of an item receiving ratings of 100, 50, & 0. The mean average rating would be 50. However, ratings of 55, 50 & 45 could also result in the same average. The second average might be more trusted because there is more consensus around a particular rating (a lower deviation).
(*In practice, some albums can have several thousand ratings)
This album is rated in the top 5% of all albums on BestEverAlbums.com. This album has a Bayesian average rating of 76.7/100, a mean average of 76.6/100, and a trimmed mean (excluding outliers) of 77.0/100. The standard deviation for this album is 14.3.

This is an amazing album. It hits me at my core, really impacted me back in 1993. If life feels hard, hopeless, put this album on and let the music sink in.

Tumbling towards ecstasy, is without doubt Sarah Mcclachlan's best album. It's a beautiful record that has influences ranging from Joni Mitchell to Enya. There are great songs here, from opener, possession, to the achingly lovely, good enough, from the sweet, ice cream, to the atmospheric title track. Mcclachlan is at her best on an album that is totally underrated and overlooked. It's an album that deserves more attention. Excellent.

Such a haunting voice... she got bigger after this album, but lost her aching vocals.

This and 'Solace' are her better ones, solid album.

Her delicate, folky pop came to fruition here. She keeps her emotions guarded but bare.

Your feedback for Fumbling Towards Ecstasy