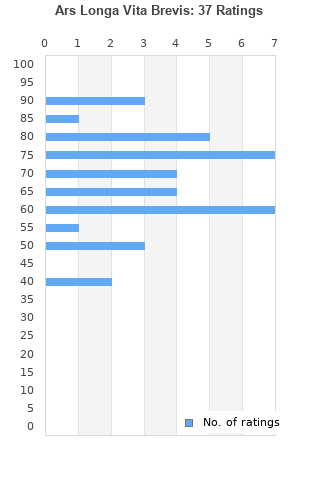 THE NICE ARS LONGA VITA BREVIS 1973 RECORD COLUMBIA RECORDS P 11634
Condition: Used
Time left: 1d 9h 54m 14s
Ships to: Worldwide
$4.89
Go to store
Product prices and availability are accurate as of the date indicated and are subject to change. Any price and availability information displayed on the linked website at the time of purchase will apply to the purchase of this product.  See full search results on eBay

Ars Longa Vita Brevis is ranked 2nd best out of 7 albums by The Nice on BestEverAlbums.com.

The best album by The Nice is The Thoughts Of Emerlist Davjack which is ranked number 11206 in the list of all-time albums with a total rank score of 100. 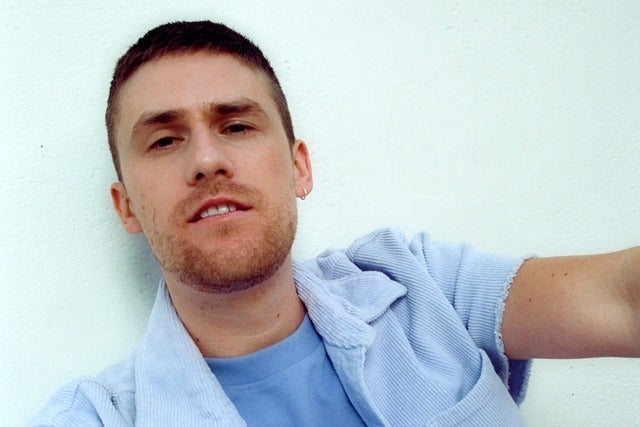 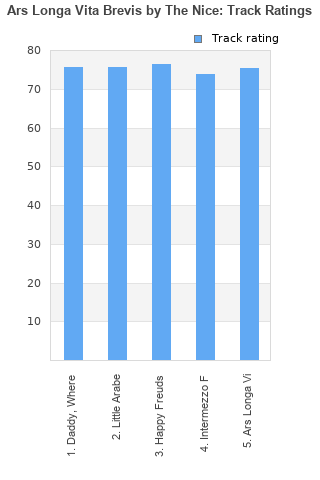 Rating metrics: Outliers can be removed when calculating a mean average to dampen the effects of ratings outside the normal distribution. This figure is provided as the trimmed mean. A high standard deviation can be legitimate, but can sometimes indicate 'gaming' is occurring. Consider a simplified example* of an item receiving ratings of 100, 50, & 0. The mean average rating would be 50. However, ratings of 55, 50 & 45 could also result in the same average. The second average might be more trusted because there is more consensus around a particular rating (a lower deviation).
(*In practice, some albums can have several thousand ratings)
This album has a Bayesian average rating of 69.8/100, a mean average of 68.8/100, and a trimmed mean (excluding outliers) of 68.8/100. The standard deviation for this album is 12.9.

Nice introduce the classical music in Rock version thanks to the maestry of K. Emerson at keyboards... I like their execution of Sibeliu and Bach more than original... Keith will do better than with ELP and Mussorsky

The second album from the Nice has its moment but its also characterized by the same limitations as group's debut album. They were never really great songwriters, though some of their best songs are actually quite solid time-pieces. Vocally group also had difficulties with catching up with contemporary big names such as Traffic, Cream or Procol Harum.

I quite like the first three songs "Daddy Where did I Come From" ( somehow the melody line reminds me of Blur ), "Little Arabella" and "Happy Freuds" - all three psychedelia with a little touch of classical.

But who needs the Nice's version of the Karelia suite, which like the original side two of the album just feels longwinded.

The Brandenburger part of "Ars Longa Vita Brevis" is great, though. But the single version is in fact identical to it, so you don't have to sit through the whole 19.20 minutes.