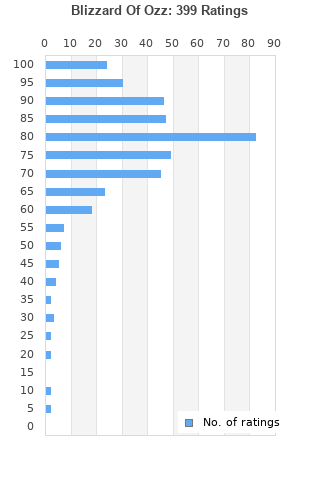 Blizzard of Ozz by Ozzy Osbourne (CD, Aug-1995, Epic) remaster
Condition: Very Good
Time left: 4h 33m 27s
Ships to: Worldwide
$4.99
Go to store
Product prices and availability are accurate as of the date indicated and are subject to change. Any price and availability information displayed on the linked website at the time of purchase will apply to the purchase of this product.  See full search results on eBay

Blizzard Of Ozz is ranked as the best album by Ozzy Osbourne. 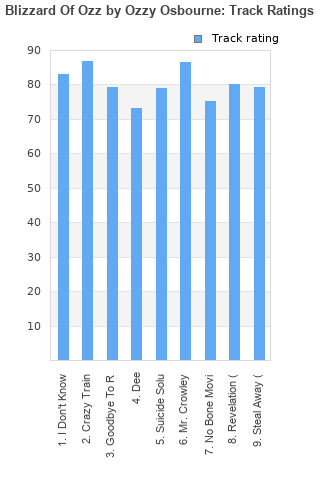 Rating metrics: Outliers can be removed when calculating a mean average to dampen the effects of ratings outside the normal distribution. This figure is provided as the trimmed mean. A high standard deviation can be legitimate, but can sometimes indicate 'gaming' is occurring. Consider a simplified example* of an item receiving ratings of 100, 50, & 0. The mean average rating would be 50. However, ratings of 55, 50 & 45 could also result in the same average. The second average might be more trusted because there is more consensus around a particular rating (a lower deviation).
(*In practice, some albums can have several thousand ratings)
This album is rated in the top 4% of all albums on BestEverAlbums.com. This album has a Bayesian average rating of 77.6/100, a mean average of 76.2/100, and a trimmed mean (excluding outliers) of 77.7/100. The standard deviation for this album is 17.0.

A fantastic debut solo album from Ozzy, which proved he could continue to have a great career without Sabbath.

Great debut album for Ozzy. Great name, great album cover, great music. Apart from the obvious fan favourites, there are some other diamonds on this album. Let's not forget the input of Don Airey either, who sadly gets a mention so small, that you need a magnifying glass to find it on the rear of the sleeve.

A new lease on life for Ozzy & hooking up with Randy. An amazing debut & I play it often.

Not as good as Diary Of A Madman and Bark at the Moon.

An astonishing Ozzy album, crazy train continues to be a favorite metal song of mine!

Crazy Train and Mr Crowley, two of the greatest heavy tracks there have ever been.

Your feedback for Blizzard Of Ozz