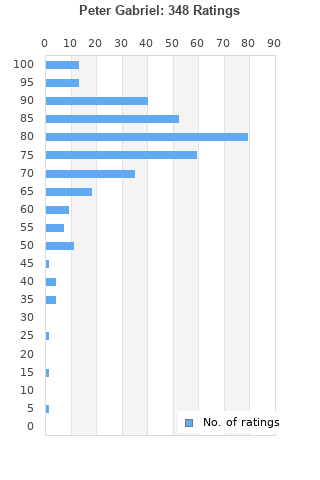 The best album by Peter Gabriel is So which is ranked number 274 in the list of all-time albums with a total rank score of 7,147. 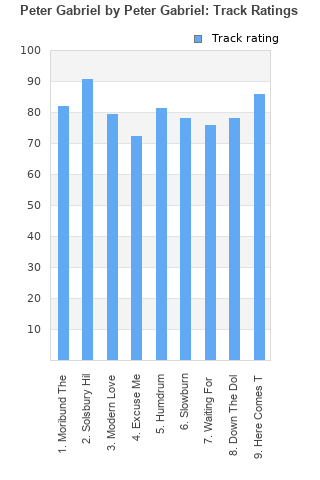 Rating metrics: Outliers can be removed when calculating a mean average to dampen the effects of ratings outside the normal distribution. This figure is provided as the trimmed mean. A high standard deviation can be legitimate, but can sometimes indicate 'gaming' is occurring. Consider a simplified example* of an item receiving ratings of 100, 50, & 0. The mean average rating would be 50. However, ratings of 55, 50 & 45 could also result in the same average. The second average might be more trusted because there is more consensus around a particular rating (a lower deviation).
(*In practice, some albums can have several thousand ratings)
This album is rated in the top 3% of all albums on BestEverAlbums.com. This album has a Bayesian average rating of 78.1/100, a mean average of 77.5/100, and a trimmed mean (excluding outliers) of 78.3/100. The standard deviation for this album is 13.1.

A very solid debut from Gabriel. Better and more consistent work was to come, but there are undeniable moments of greatness here.

"I will show another me."

An ambitious first album from Peter Gabriel. Incorporating rock, folk, and even barbershop music, it's an eclectic piece of work. Moribund the burgermeister, is a great opening track, and, modern love, is also a strong cut, but best songs are the excellent, Salisbury hill, and closing track, here comes the flood. A great start to a wonderful career.

Peter Gabriel have had his own voice even in Genesisi. This is fine debut album, althought little soehow uneven. Of course, Solsbury Hill is earworm but there are lot more songs with great spirit of Peter Gabriel. I recommend this album, 91/100 points from me.

Better than anything he put out with Genesis and just the start of his greatness.

Good debut that set the tone for his next few albums. Solsbury Hill is one of his best songs.

Gabriel immediately establishes a gap from Genesis with this album. Very clever songwriting and a number of strong tracks, including Solsbury Hill - now seen as a trademark great. Humdrum, Flood and Dolce Vita are all better.

Your feedback for Peter Gabriel