The best album by The Flaming Lips is The Soft Bulletin which is ranked number 106 in the list of all-time albums with a total rank score of 15,394.

Listen to The Flaming Lips And Heady Fwends on YouTube 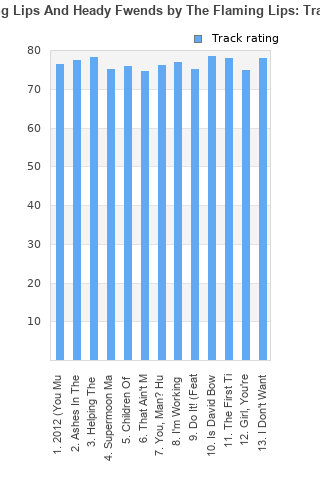 Rating metrics: Outliers can be removed when calculating a mean average to dampen the effects of ratings outside the normal distribution. This figure is provided as the trimmed mean. A high standard deviation can be legitimate, but can sometimes indicate 'gaming' is occurring. Consider a simplified example* of an item receiving ratings of 100, 50, & 0. The mean average rating would be 50. However, ratings of 55, 50 & 45 could also result in the same average. The second average might be more trusted because there is more consensus around a particular rating (a lower deviation).
(*In practice, some albums can have several thousand ratings)
This album has a Bayesian average rating of 65.3/100, a mean average of 63.4/100, and a trimmed mean (excluding outliers) of 64.1/100. The standard deviation for this album is 16.9.

I wouldn't consider this a Flaming Lips studio album but it is a Flaming Lips collaborative studio album and it's really good for what it is. They are one of the best at experiencing with different sounds so I don't blame them for wanting to make a collective experiment with multiple artists. Definitely gets dark and trippy throughout which is awesome.

Definitely not a great intro for anyone not super familiar with the Lips. I would only really recommend this album for those that like their Embryonic phase. I'm not really one of those people (though I do think they are the greatest band of all time regardless), so it feels to me like a large excuse to name-drop some collabs. I had much higher hopes for the Bon Iver, Tame Impala, and (especially) Nick Cave collaborations, but they were pretty lackluster. Tame Impala was alright I guess. There are a couple of moments on the album as a whole that are pretty cool, but there is a lot of drudgery to balance out. "Is David Bowie Dying?" (and yes, he was) is probably the highlight. Overall, there are much better oddities that the Lips have put out.

tfw kesha was the best guest performance on here

listed over is the vinyl version. cd version has a different last track. but who really cares? this will take me too much time and effort to finally like.

Fuck this shit. I devoted more than an hour to this piece of crap. Fuck Chris Martin, in particular. Burn this album and forget about it: only names, names, names. No music. Ok, 1 or 2 tracks: That ain't my trip; I'm working at NASA on Acid.

I like some of the tracks on this album, but it doesn't feel like it all really comes together. The weakest Flaming Lips album since the early 90s.

Very different than their stuff from Soft Bulletin. I've listened to about half the tracks so far and I have to say its pretty creepy. Its very cool that all these artists worked a bit on this album, but I don't think they did a proper job.

I'd probably like it if it wasn't so creepy sounding.

Your feedback for The Flaming Lips And Heady Fwends