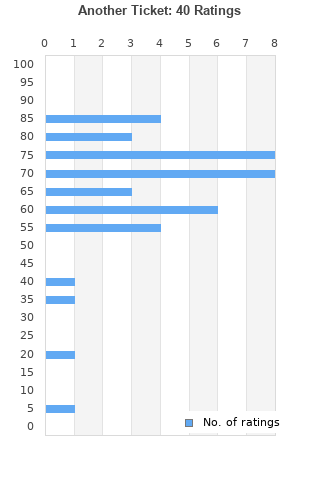 Another Ticket CD NEW
Condition: Brand New
Time left: 4h 55m 54s
Ships to: Worldwide
$18.87
Go to store
Product prices and availability are accurate as of the date indicated and are subject to change. Any price and availability information displayed on the linked website at the time of purchase will apply to the purchase of this product.  See full search results on eBay

Another Ticket is ranked 14th best out of 54 albums by Eric Clapton on BestEverAlbums.com.

The best album by Eric Clapton is Unplugged which is ranked number 1125 in the list of all-time albums with a total rank score of 1,638. 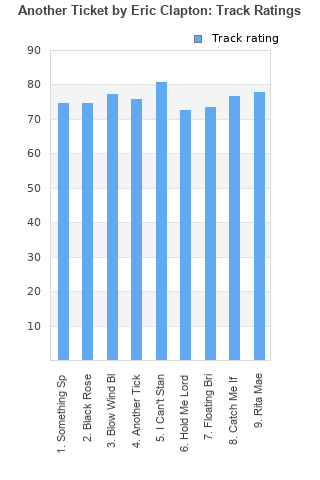 Rating metrics: Outliers can be removed when calculating a mean average to dampen the effects of ratings outside the normal distribution. This figure is provided as the trimmed mean. A high standard deviation can be legitimate, but can sometimes indicate 'gaming' is occurring. Consider a simplified example* of an item receiving ratings of 100, 50, & 0. The mean average rating would be 50. However, ratings of 55, 50 & 45 could also result in the same average. The second average might be more trusted because there is more consensus around a particular rating (a lower deviation).
(*In practice, some albums can have several thousand ratings)
This album has a Bayesian average rating of 67.7/100, a mean average of 64.4/100, and a trimmed mean (excluding outliers) of 66.1/100. The standard deviation for this album is 16.9.

There are cheesy 80s keyboards on the title track. If you can't get past that, you're going to miss one of Clapton's best albums, just like everybody else--this is an incredibly underrated album. Some can hear how good it is, though--I'm not the only one--and I've heard it said that having Albert Lee along prodded Clapton to step it up a notch.

The title track is a ballad. It's a beautiful one, but it is pretty much ruined by those keyboards. So if all of that is too much for you, skip side 1 to avoid that track. Too bad, though, because the other three tracks on side 1 are excellent.

But if you put on side 2 and play it through and you think that's not the best stuff Clapton recorded for five or six years on either side of this record...you and I don't hear things the same.

Upkeep on a castle is expensive.

Not at all bad, but mostly forgettable with a few standout songs (Can't Stand It and a cover of Muddy Waters Blow wind Blow). For completists only.

excuse me, but this is really not my kind of music. delicate and cheesy songs for abandoned supermarkets. listening to it, makes me wanna shout: surge up!

I overlooked this one back in the day and have only found it way after it's relevance, if it ever had any, was gone. Not Clapton at his best by far but a good little soft rocker with 'God's' guitar skills taking center stage.

Your feedback for Another Ticket