The Photo Album (album) by Death Cab For Cutie 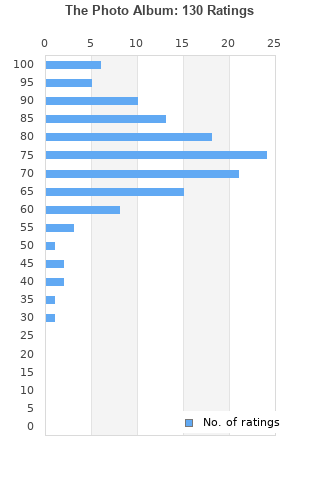 The Photo Album is ranked 5th best out of 14 albums by Death Cab For Cutie on BestEverAlbums.com.

The best album by Death Cab For Cutie is Transatlanticism which is ranked number 354 in the list of all-time albums with a total rank score of 5,491. 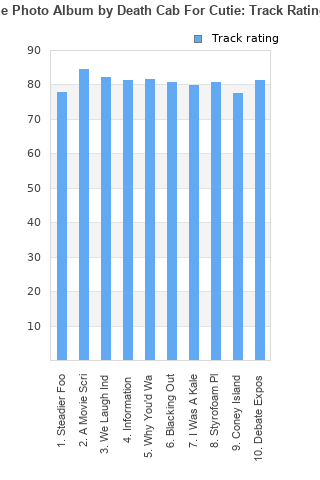 Outliers can be removed when calculating a mean average to dampen the effects of ratings outside the normal distribution. This figure is provided as the trimmed mean. A high standard deviation can be legitimate, but can sometimes indicate 'gaming' is occurring. Consider a simplified example* of an item receiving ratings of 100, 50, & 0. The mean average rating would be 50. However, ratings of 55, 50 & 45 could also result in the same average. The second average might be more trusted because there is more consensus around a particular rating (a lower deviation).
(*In practice, some albums can have several thousand ratings)
This album is rated in the top 17% of albums on BestEverAlbums.com. This album has a mean average rating of 75.0/100. The trimmed mean (excluding outliers) is 75.1/100. The standard deviation for this album is 13.3.

I love this album! Lyrically, this is probably my favorite DCFC album. I don't know why, but songs like "Styrofoam Plates", "Why You'd Want To Live Here" and "Information Travels Faster" really resonate to me, even though I can't relate to them in a personal way. I think I just like the poetry of Gibbard and how he tells his stories. This is what I like the most about this album, the stories, the images, the colors. I don't think it's their best mixed album though (why the drums so loud on "We Laugh Indoors"???). But if you can go past the so-so mix and focus on the lyrics, the musical ideas and the emotions, you're in for a treat!

Generic soft emo with above average lyrics. Death Cab still hasn't put it together yet but glimpses like Move Script Ending and We Laugh Indoors are songs that stand up with their best to come.

The rest is average and a fine mood listen. It's 2nd tier Death Cab with the new Kintsugi and Codes and Keys. It's worth having in your music library if you like Death Cab but it isn't the album that is going to gain the band new fans

Overall a very solid album; while no tracks really seem to especially stand out the consistency of quality is quite impressive.

A great, loose concept album with beautifully written songs. There's something for everyone here. Probably Death Cab's most "pop" album, but a fine one at that.

A very calm album. Was expecting it to be more like Jimmy Eats World or Fall Out Boy. Pleasant music all round.

For some odd reason, I've missed out on this album but I feel like I've heard it countless times before. It just feels like their most strong and well written record. With each song being pulled together in what seems like a burst of inspiration, it actually feels like the first true Death Cab record as well. Highly underrated in my opinion, just like all the other Death Cab albums, each one seems to be pinned down by at least one critic or two when after all all of the albums are extremely delicate and just pretty.

Ben Gibbard seems to hate this album, basically saying it was thrown together in a recent interview. (i just think he doesn't connect with what he was feeling at that time anymore.) I think it's that at-the-moment, stream-of-consciousness writing that is the album's greatest asset, right alongside the clever turns of narrative, making this the best death cab album. "steadier footing" is a nice intro, but "a movie script ending" takes the first terrific snapshot. (IMO, their lyrics have progressively become more generic.) It's all about an everyday occurrence (flitting through an airport) as in "With your hands on my shoulders / A meaningless movement / A movie script ending / And the patrons are leaving" making everyday tedium sound poetic. "we laugh indoors" ("the blissful tones bounce off the walls / and fall to the ground. / Peel the hardwood backs / and let them loose from decades trapped and listen, so still") picks up the juice, obsessed with a gf (?) named "guinevere" (repeating "i loved you guinevere" at least 23 times) who's leaving him. Then "information travels faster" which starts confessionally "I intentionally wrote it out to be an illegible mess. / You wanted me to write you letters, but I'd rather lose your address / and forget that we'd ever met and what did or did not occur." -- there's a pensivity to the piano playing (maybe an inner mind echo). "why you'd want to live here" is a recrimination of L.A. dissing with every turn, like "I'm in Los Angeles today... / Garbage cans comprise the medians of freeways always creeping / Even when the population's sleeping." and "you can't swim in a town this shallow". "Blacking out the Friction" begins with guitar friction leading into the insight of "I don't mind the weather, I've got scarves and caps and sweaters, / I've got long johns under slacks for blustery days. / I think that's its brainless to assume that making changes / to your window's view will give a new perspective. / The hardest part is yet to come. ". Still cold in the next song where "I put on my overcoat and walked into winter, my teeth chattered rhythms. / And they were grouped in twos or threes, / like a morse code message was sent from me to me". "Styrofoam Plates" is the best song though, a bitter eulogy to an absent father, starting off "There's a saltwater film on the jar of your ashes I threw them to sea but a gust blew them backwards / And the sting in my eyes that you then inflicted was par for the course just as when you were living. / It's no stretch to say you were not quite a father but a donor of seeds to a poor single mother that would raise us alone / we never saw the money that went down your throat through the hole in your belly" and the drums building tension before "You're a disgrace to the concept of family / The priest won't divulge that fact in his homily" and "just cause he's gone it doesn't change the fact: he was a bastard in life thus a bastard in death". Ouch. The following "coney island" is sweet describing memories of a now-closed amusement park and "debate exposes doubt", which is titled confrontational, is comparably placid in its self-found "clarity". No duds here. 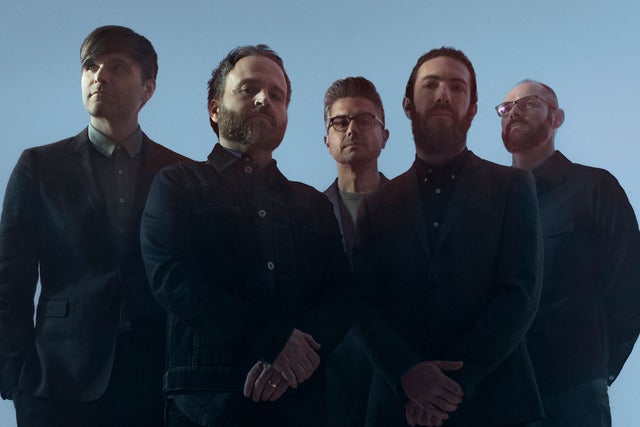 Your feedback for The Photo Album