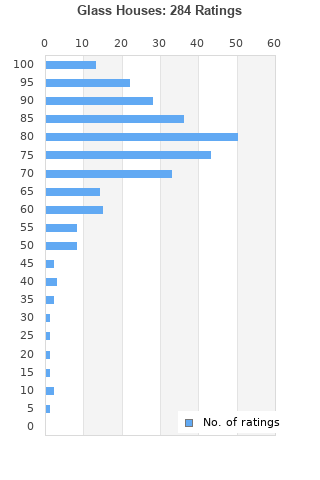 Vintage 1980 Billy Joel Vinyl LP-Glass Houses- Columbia Records 1st Press Vinyl
Condition: Used
Time left: 4h 53m 26s
Ships to: Worldwide
$15.50
Go to store
Product prices and availability are accurate as of the date indicated and are subject to change. Any price and availability information displayed on the linked website at the time of purchase will apply to the purchase of this product.  See full search results on eBay

Glass Houses is ranked 2nd best out of 23 albums by Billy Joel on BestEverAlbums.com.

The best album by Billy Joel is The Stranger which is ranked number 259 in the list of all-time albums with a total rank score of 7,638. 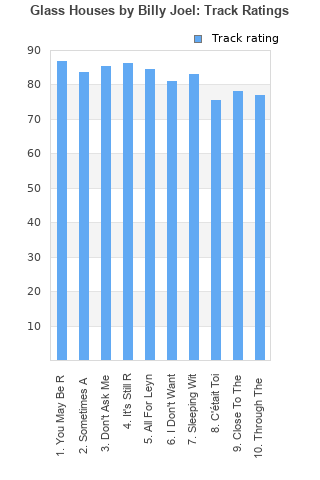 Rating metrics: Outliers can be removed when calculating a mean average to dampen the effects of ratings outside the normal distribution. This figure is provided as the trimmed mean. A high standard deviation can be legitimate, but can sometimes indicate 'gaming' is occurring. Consider a simplified example* of an item receiving ratings of 100, 50, & 0. The mean average rating would be 50. However, ratings of 55, 50 & 45 could also result in the same average. The second average might be more trusted because there is more consensus around a particular rating (a lower deviation).
(*In practice, some albums can have several thousand ratings)
This album is rated in the top 6% of all albums on BestEverAlbums.com. This album has a Bayesian average rating of 76.6/100, a mean average of 75.5/100, and a trimmed mean (excluding outliers) of 76.7/100. The standard deviation for this album is 15.8.

Great album all around! "Don't Ask My Why" is one of my favorites.

Side One is terrific, side 2 not so good though, Still Rock n' Roll standout track and I like Leyna.

Billy Joel's punk/new wave record. It's a much more cynical and angry Joel than on previous albums, and it's an excellent example of a seventies superstar moving into the 'new sound funny' of the eighties. Two of the tracks are off course out and out Joel classics. You may be right, and, especially, it's still rock'n'roll to me, show an artist with still something to say. Other highlights are the cool rock of, I don't want to be alone, the new wavy, just a fantasy, and the brilliant, all for Leyna, possibly the album's best song. Other standouts are, the dirty rock of, close to the borderline, and the flamenco/folk rock of, don't ask me why. For older fans, there's also a couple of nice ballads too. All in all, it's a solid and consistent album, one of Billy Joel's best.

Billy Joel adds a little more rock to his usual brand of pop, relying much less on piano than previous albums. As a pop/rock answer to the punk rock of the time ("it's still rock and roll to me"!), it's a solid album, with a very good first half which falls apart a bit in the 2nd.

This one is actually my favorite Billy Joel album.

Good songs. I liked 'All For Leyna'.

billy joel: what you get is exactly what you expected: solid songs. this one slackens towards the end.

First half of this album : total home runs. Second half: not so much.

Your feedback for Glass Houses