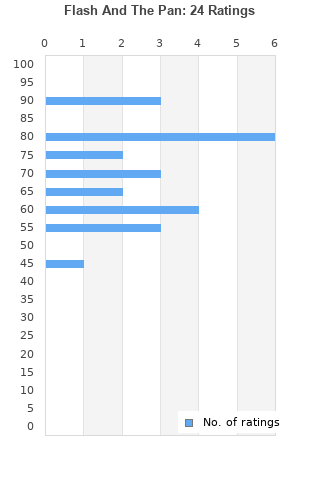 FLASH AND THE PAN  Early Morning Wake Up Call
Condition: Used
Time left: 10h 25m 37s
Ships to: Worldwide
$4.99
Go to store
Product prices and availability are accurate as of the date indicated and are subject to change. Any price and availability information displayed on the linked website at the time of purchase will apply to the purchase of this product.  See full search results on eBay

Flash And The Pan bestography 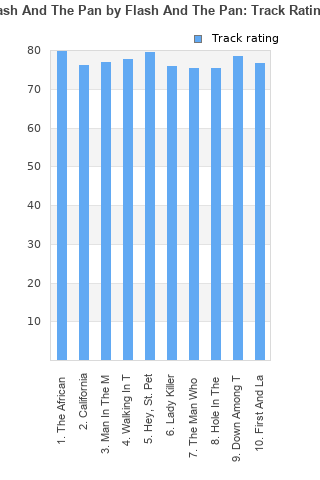 Flash And The Pan rankings

Flash And The Pan collection

Flash And The Pan ratings

Rating metrics: Outliers can be removed when calculating a mean average to dampen the effects of ratings outside the normal distribution. This figure is provided as the trimmed mean. A high standard deviation can be legitimate, but can sometimes indicate 'gaming' is occurring. Consider a simplified example* of an item receiving ratings of 100, 50, & 0. The mean average rating would be 50. However, ratings of 55, 50 & 45 could also result in the same average. The second average might be more trusted because there is more consensus around a particular rating (a lower deviation).
(*In practice, some albums can have several thousand ratings)
This album has a Bayesian average rating of 70.4/100, a mean average of 68.8/100, and a trimmed mean (excluding outliers) of 68.8/100. The standard deviation for this album is 13.1.

Flash And The Pan favourites

Flash And The Pan comments

Down among the dead men is absolutely brilliant.

I didn't know this album and now I know why

I've said it many times in different contexts: Flash And The Pan is one of the most underrated and overlooked bands ever.

This, their debut album, is perhaps the album that clearly confirms my postulate. The album is innovative, does not sound like something you've heard before, it is characterized by fine catchy tunes and intelligent lyrics that gives the listener food for thought.

The album includes the group’s (duo) debut single, "Hey, St. Peter," which should have been a much bigger hit than it was for. A top 5 position in Australia and a top 100 in the U.S.. The fine sequel "Down Among the Dead Men", which also is from this album, performed at roughly the same level, and reached a place at number 54 in Great Britain.

As mentioned, the album marked by very fine songs written by the duo of George Young and Harry Vanda, who together had a history of the Easybeats. No numbers fall through and the album can only be recommended at the highest level.

Besides the two hits I'll highlight "Walking in the Rain," "California" and "First and Last".

Your feedback for Flash And The Pan