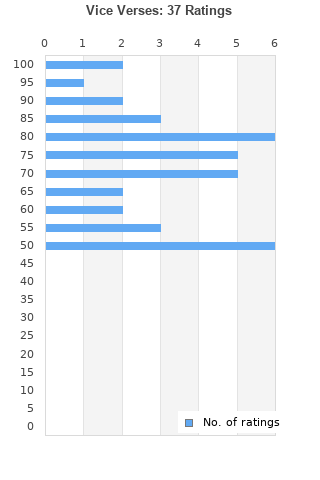 Switchfoot - Vice Verses CD Great condition
Condition: Very Good
Time left: 23h 39m 8s
Ships to: Worldwide
$9.95
Go to store
Product prices and availability are accurate as of the date indicated and are subject to change. Any price and availability information displayed on the linked website at the time of purchase will apply to the purchase of this product.  See full search results on eBay

Vice Verses is ranked 2nd best out of 16 albums by Switchfoot on BestEverAlbums.com.

The best album by Switchfoot is The Beautiful Letdown which is ranked number 2943 in the list of all-time albums with a total rank score of 510. 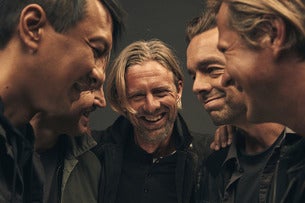 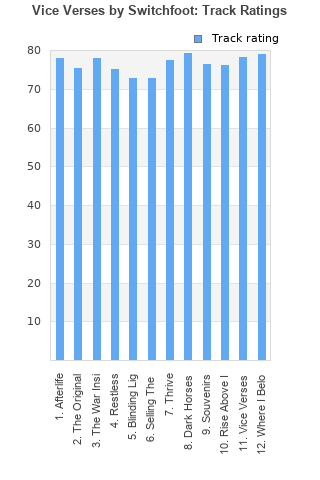 Rating metrics: Outliers can be removed when calculating a mean average to dampen the effects of ratings outside the normal distribution. This figure is provided as the trimmed mean. A high standard deviation can be legitimate, but can sometimes indicate 'gaming' is occurring. Consider a simplified example* of an item receiving ratings of 100, 50, & 0. The mean average rating would be 50. However, ratings of 55, 50 & 45 could also result in the same average. The second average might be more trusted because there is more consensus around a particular rating (a lower deviation).
(*In practice, some albums can have several thousand ratings)
This album has a Bayesian average rating of 73.4/100, a mean average of 73.5/100, and a trimmed mean (excluding outliers) of 73.5/100. The standard deviation for this album is 14.2.

An underrated rock album. Probably not for everyone, but great lyrics, and this is probably their heaviest album, guitar-wise anyway. An absolute favorite of mine. Favorite tracks: Dark Horses, Afterlife, Selling the News, Rise Above It, Where I Belong. Not a bad track though. 100/100

This started out slow, but I tell you what it picked itself up in a big way. The first half of the album was good, but not great. But the second half of the album really had some great songs on it. What I like is when an album has variety. It’s really easy for a band like Switchfoot to fall into the pattern of doing what’s been relatively successful and making an album of that. But here they have variety. Some of the songs are loud and fun and then some are soft and pensive. Lyrically the album can be thought-provoking and musically it’s very well arranged. It’s a great album and definitely one worth getting.

Your feedback for Vice Verses