The Turn Of A Friendly Card by The Alan Parsons Project
Year: 1980
Overall rank: 1,908th 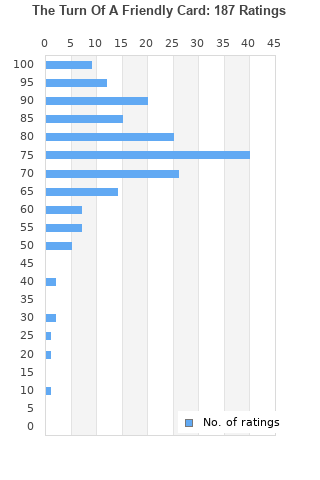 The Alan Parsons Project: the Turn of a Friendly Card Vinyl LP
Condition: New
Time left: 9h 17m 55s
Ships to: Worldwide
$29.20
Go to store
Product prices and availability are accurate as of the date indicated and are subject to change. Any price and availability information displayed on the linked website at the time of purchase will apply to the purchase of this product.  See full search results on eBay

The Turn Of A Friendly Card is ranked 3rd best out of 17 albums by The Alan Parsons Project on BestEverAlbums.com.

The best album by The Alan Parsons Project is I Robot which is ranked number 1352 in the list of all-time albums with a total rank score of 1,323. 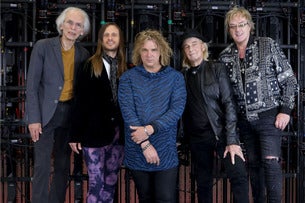 Listen to The Turn Of A Friendly Card on YouTube 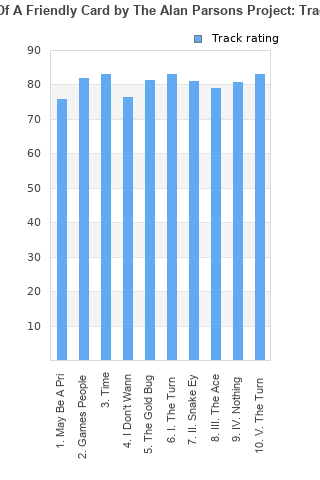 The Turn Of A Friendly Card rankings

The Turn Of A Friendly Card collection

The Turn Of A Friendly Card ratings

Rating metrics: Outliers can be removed when calculating a mean average to dampen the effects of ratings outside the normal distribution. This figure is provided as the trimmed mean. A high standard deviation can be legitimate, but can sometimes indicate 'gaming' is occurring. Consider a simplified example* of an item receiving ratings of 100, 50, & 0. The mean average rating would be 50. However, ratings of 55, 50 & 45 could also result in the same average. The second average might be more trusted because there is more consensus around a particular rating (a lower deviation).
(*In practice, some albums can have several thousand ratings)
This album is rated in the top 17% of all albums on BestEverAlbums.com. This album has a Bayesian average rating of 75.1/100, a mean average of 74.1/100, and a trimmed mean (excluding outliers) of 75.2/100. The standard deviation for this album is 16.1.

The Turn Of A Friendly Card favourites

The Turn Of A Friendly Card comments

Very good album, maybe just a little below I Robot. "Nothing Left to Lose" is a particular favourite, I like the change to a brief reggae beat section, then the return to the "Snake Eyes" theme, which the song ends on. I like the instrumental "The Gold Bug" for it's resemblance to Jean-Michel Jarre's "Oxygene Pt. IV". "The Turn of a Friendly Card(Parts 1 and 2)" is very nice too, I like the lyric "And they think it will make their lives easier....for God knows up till now it's been hard".

Brilliant and creative album. There isn't a weak track to be found.

Tier List for my preferences of the tracks on this album:
NOTE: 6 is "The Turn Of A Friendly Card" in its entirety.

Totally addicted to this album. Best they've ever created

A complete and utter surprise after the string of meh-tier albums I've heard from these guys.

The Turn Of A Friendly Card is Amazing.
All the other songs are not that good, but still enjoyable.

The strings are wonderful. The whole idea falls flat.

I used to somewhat derisively call APP “Pop Floyd.” Then, as time went on and I couldn’t stop listening to them, I came to realize that it wasn’t a derogatory nickname at all; what it it meant to me was that they were thoughtful and accessible at the same time. And at their peak they put out very good records. Friendly Card is their best, highlighted by the first three songs and the title track(s).

Your feedback for The Turn Of A Friendly Card