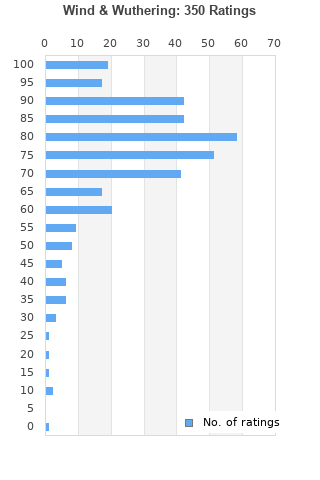 Wind & Wuthering is ranked 7th best out of 33 albums by Genesis on BestEverAlbums.com. 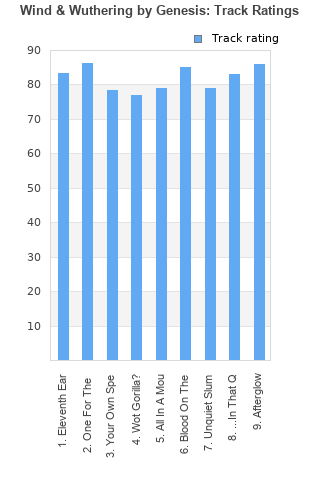 Rating metrics: Outliers can be removed when calculating a mean average to dampen the effects of ratings outside the normal distribution. This figure is provided as the trimmed mean. A high standard deviation can be legitimate, but can sometimes indicate 'gaming' is occurring. Consider a simplified example* of an item receiving ratings of 100, 50, & 0. The mean average rating would be 50. However, ratings of 55, 50 & 45 could also result in the same average. The second average might be more trusted because there is more consensus around a particular rating (a lower deviation).
(*In practice, some albums can have several thousand ratings)
This album is rated in the top 7% of all albums on BestEverAlbums.com. This album has a Bayesian average rating of 76.0/100, a mean average of 75.1/100, and a trimmed mean (excluding outliers) of 76.1/100. The standard deviation for this album is 16.6.

One of Genesis' underrated albums. For me, it is on the same level as A Trick of the Tail. Sometimes I even find it a little better.

Not quite as good as Trick of the Tail from earlier in 1976 but still a very good album!

I find this album to be quite forgettable and every time I revisit it I struggle to recall the high points of the music. Bar a few tracks, most songs just pass the time and don't really captivate me. This makes it feel like a long 50 minutes. Having said this, there is still quite a lot to love about this record when you put it on. There is some phenomenal and diverse instrumentation basically on every song. The more delicate acoustic guitar moments are the ones that I always favour when I am listening. Phil Collins is just as good as ever as well and his vocal delivery is amazing on most of the tracks. However, some songs are far too elongated and conclude far past their natural finishing point which leaves us waiting for the next song to start. Overall, a record that I enjoy every time I play it but nothing grabs me on the album and keeps pulling me back, it is definitely worth a listen though.

I never seem to pick this album out as one of my go to Genesis albums if I wanted to stick something on the turntable. However, when I play it I'm immediately hooked. It's not as daring or as dynamic as A Trick Of The Tail but there are still some great moments. I've always had a soft spot for Eleventh Earl Of Mar. My standout has to be One For The Vine, I love Phil's vocals and the playing by all is top notch. Afterglow is definitely better live with its purple lights, dry ice and all.

A very good ending to the prog era of Genesis. As is typical of Genesis, Wind & Wuthering features fantastic instrumention, spearheaded by Banks' keyboard and synthesizer work. Still, it can't help but feel like a little bit of a disappointment after the fantastic A Trick of the Tail, Genesis' first release after the departure of Peter Gabriel. A Trick of the Tail just knocks it out of the park with instrumentation and deep, meaningful, cleverly-written lyrics, whereas Wind & Wuthering is almost as impressive instrumentally but lacking a bit more in the lyrics category. That doesn't mean it's not worth listening to. It's an absolutely fine addition to the Genesis catalog, featuring excellent songs like Eleventh Earl of Mar, One for the Vine, Afterglow, Your Own Special Way and the crown of the album, Blood On the Rooftops. It's consistently good, it's just that the highlights aren't as high as those on its predecessor. All in all, a very nice way to end the band's four-piece era, as Steve Hackett departed shortly after its release.

A beautiful and great album, but not necessarily memorable save the two songs that were meant to be catchy. It's definitely an album that is greater than the sum of it's parts, and should be listen to all the way through. I see it as equal in terms of quality and enjoyment to Trick of The Tail; which means, paired together, this is the closest the band got to matching the prog rock greatness of the Peter Gabriel era, but still some up short for me personally. You have less of Steve Hackett's influence and more of Tony Banks, which isn't necessarily bad, but Genesis works best when the band members have equal distribution of their talents and songwriting. I really think the band worked better as a pop rock group with Phil Collins in the front, rather than trying too hard to retain their Prog Gods status. The best song for me is In That Quite Earth.

Autumnal. A grower of an album.

One of the most underrated Genesis albums alongside And Then There Were Three and Trespass. Requires more time and repeated listens than A Trick Of The Tail for it to really “sink in,” but it’s fantastic when you finally start to get into it. It also has a very rich, atmospheric, romantic, classical sound that bridges the band’s prog and pop eras quite nicely. If they took out “All In A Mouse’s Night” and replaced that song with the buried forgotten gem “Inside And Out”, this would’ve been a near perfect record. My favorite release in their catalogue with Phil Collins at the mic.

Another strong Genesis album. Wind and Wuthering, isn't quite as instantly memorable as, trick of the tail, but repeated listens brings out it's sense of mystery and wonder. Nice album.

Your feedback for Wind & Wuthering