Their Satanic Majesties Request (studio album) by The Rolling Stones 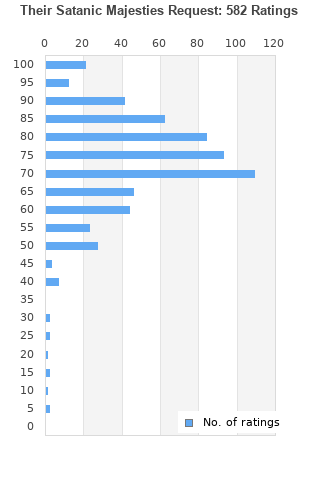 Their Satanic Majesties Request is ranked 8th best out of 95 albums by The Rolling Stones on BestEverAlbums.com.

The best album by The Rolling Stones is Exile On Main St. which is ranked number 43 in the list of all-time albums with a total rank score of 26,675. 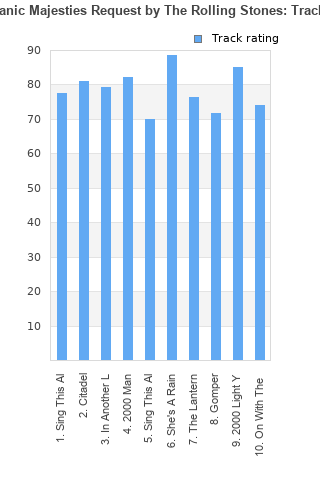 Rating metrics: Outliers can be removed when calculating a mean average to dampen the effects of ratings outside the normal distribution. This figure is provided as the trimmed mean. A high standard deviation can be legitimate, but can sometimes indicate 'gaming' is occurring. Consider a simplified example* of an item receiving ratings of 100, 50, & 0. The mean average rating would be 50. However, ratings of 55, 50 & 45 could also result in the same average. The second average might be more trusted because there is more consensus around a particular rating (a lower deviation).
(*In practice, some albums can have several thousand ratings)
This album has a Bayesian average rating of 73.8/100, a mean average of 73.0/100, and a trimmed mean (excluding outliers) of 73.8/100. The standard deviation for this album is 14.5.

An album which may not appeal to diehard Stones fans but which will sit happily near the top of any psychedelic top 100. As with The Who, David Bowie, The Bee Gees, Marc Bolan, to name but a few, several artists produced excellent psychedelic albums but never returned to the genre.

As long as i am definitely NOT a fan of Rolling Stones... that's one of my favourite albums from their dischography... by far... Actually the style looks much more related to Beatles (according to my ears...), so that... i enjoy it so much.

They never did anything like this before, nor after. Many say, and I agree to a certain extent, that this was an attempt to match 'Sgt Peppers Lonely Hearts Club Band' by The Beatles. There may have been some self-inflicted peer pressure to do something psychedelic but I don't see 'Sgt Pepper' as that psychedelic, apart from a few exceptions. This album is more in the realms of 'We Love You', The Beatles' 'Strawberry Fields Forever', 'All You Need is Love' and generally early Pink Floyd and The Incredible String Band. What this album doesn't share, is the characters of Ray Davies, Syd Barrett, early Bowie and The Beatles' 'Mr Kite'.
Instead we have a full immersion into trippy and exoctic instrumentation and songs set in a dreamworld. This album could only have been released in 1967.
Is it any good? Does it deserve the bad press it got? I think the decades have been kind on this album and it is generally well received now and features in most YouTuber's top tens.
I love this album. Being born in 1970, I could not hear it on release, I first heard it when I was 15 and it was a total surprise. There was no internet to warn me of what to expect.
It's got a hazy, druggy vibe but the songs are a mix of excellent pop and 60's rock with eastern and psycadelic touches.
We have the beautiful 'She's a Rainbow', the spacy '2000 Light Years From Home', the country tinged but poppy '2000 Man', the music hall pastiche of 'On With the Show' and the rest is fairly psycadelic. Some excellent moments with the latter but a stinker with the over long 'Sing This All Together (See What Happens)'.
An artefact of it's time but thoroughly enjoyable generally.
I have commented on each individual track, if you have the time.

Certainly don't in my top 5 Stones albums but one that's gotten a really unfair rep over the years. It's something different, the Rolling Stones attempt at a Sgt Pepper's like art-rock type project that just doesn't totally work but still pretty enjoyable in parts.

Mostly uninteresting to me. It doesn't seem like all that much effort was put into this project relative to other act's records. There are some good songs but the extended jams aren't very good.

This is my favorite album by The Rolling Stones. I might be alone on this one, but you have to understand that I'm not a big fan of The Rolling Stones classic sound. I like Sticky Fingers and Let It Bleed, but this album I love.

I think this album is not really for the Stones' fans, but on the other hand if you liked "The Pipers At The Gates Of Dawn", The Beatles 66-69 or even the first two Tame Impala albums, you might like this one.

The production is very different from the other Stones' albums, there is more space for the drums (very compressed) and they really shine, the guitar tones are more trippy and there is a lot of experimentation going on. Well, what can I say, I love this aesthetic, so I really enjoy this album more than any other from the Stones, and by a large margin.

Your feedback for Their Satanic Majesties Request