Between The Buttons (studio album) by The Rolling Stones

Between The Buttons by The Rolling Stones
Year: 1967
Overall rank: 1,319th 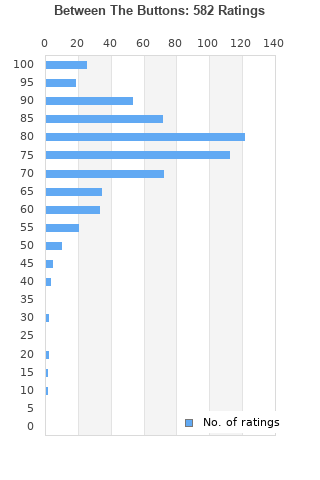 ROLLING STONES BETWEEN THE BUTTONS LP MONO LONDON LL 3499
Condition: Used
Time left: 2h 23m 3s
Ships to: Worldwide
$15.70
Go to store
Product prices and availability are accurate as of the date indicated and are subject to change. Any price and availability information displayed on the linked website at the time of purchase will apply to the purchase of this product.  See full search results on eBay

Between The Buttons is ranked 10th best out of 87 albums by The Rolling Stones on BestEverAlbums.com.

The best album by The Rolling Stones is Exile On Main St. which is ranked number 42 in the list of all-time albums with a total rank score of 30,091. 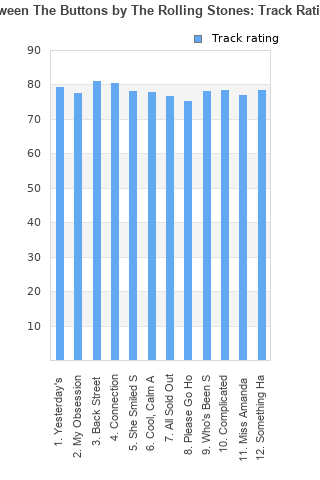 Between The Buttons rankings

Between The Buttons collection

Between The Buttons ratings

Rating metrics: Outliers can be removed when calculating a mean average to dampen the effects of ratings outside the normal distribution. This figure is provided as the trimmed mean. A high standard deviation can be legitimate, but can sometimes indicate 'gaming' is occurring. Consider a simplified example* of an item receiving ratings of 100, 50, & 0. The mean average rating would be 50. However, ratings of 55, 50 & 45 could also result in the same average. The second average might be more trusted because there is more consensus around a particular rating (a lower deviation).
(*In practice, some albums can have several thousand ratings)
This album is rated in the top 6% of all albums on BestEverAlbums.com. This album has a Bayesian average rating of 76.7/100, a mean average of 76.3/100, and a trimmed mean (excluding outliers) of 76.8/100. The standard deviation for this album is 13.1.

Between The Buttons favourites

Between The Buttons comments

An psych pop / bluesy pop rock mix that works more as an successor of Aftermath than as an predecessor of Their Satanic Majesties Request.

Good collection of songs but some are stale compared to the more lively tracks on the record. There isn't anything that blows me away but nothing is really overtly bad, either. It's good but kind of boring. I'm rating this based off of the American release.

Front loaded with some quality tunes. Falls off rather in the second half. Decent album

I'm rating the US version of this album since I can't find it on the site. "Ruby Tuesday" and "Let's Spend the Night Together" are classics. "Yesterday's Papers" comes close. Rest of the album is fine. A little disappointing coming off the excellent Aftermath (US version)

Said the same thing about Aftermath, this is not the version that I own.

Really cool album. In particular, "Cool, Calm and Collected" and "Something Happened to Me Yesterday" are deliciously quirky. Of course the US version, with the famous two-sided single, is preferable though.

The production is overloaded

A consistently good album but not a great album. I prefer Aftermath & Out Of Our Heads as far as pre Stones 1968 is concerned. Its not a bad album I mean 80/100 is good Yesterdays Papers, Back Street Girl & Who's Been Sleeping here are brilliant it is just as a whole it doesn't work as well as the previously mentioned albums.

Good but not great early Stones album. Decent songs, but they don't have that in your face attitude that is the Stones' strength.

This era of the Stones is by far my favorite, Out of Our Heads thru Beggars Banquet. This one falls smack in the middle, which awesome pop and psychedelic songs to brighten your day

Your feedback for Between The Buttons