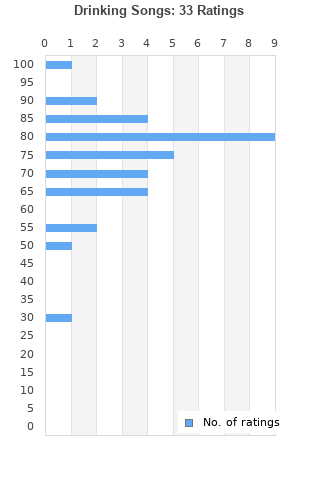 Drinking Songs is ranked as the best album by Matt Elliott. 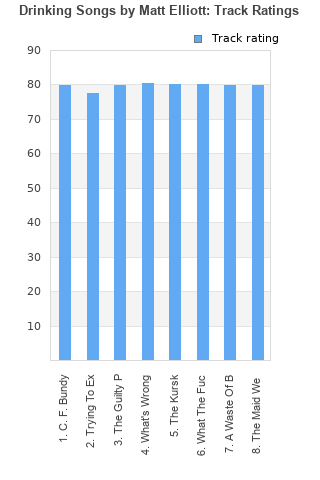 Rating metrics: Outliers can be removed when calculating a mean average to dampen the effects of ratings outside the normal distribution. This figure is provided as the trimmed mean. A high standard deviation can be legitimate, but can sometimes indicate 'gaming' is occurring. Consider a simplified example* of an item receiving ratings of 100, 50, & 0. The mean average rating would be 50. However, ratings of 55, 50 & 45 could also result in the same average. The second average might be more trusted because there is more consensus around a particular rating (a lower deviation).
(*In practice, some albums can have several thousand ratings)
This album is rated in the top 10% of all albums on BestEverAlbums.com. This album has a Bayesian average rating of 75.7/100, a mean average of 75.0/100, and a trimmed mean (excluding outliers) of 76.5/100. The standard deviation for this album is 12.8.

I'm a pretty big fan of slowcore and sad-sack songwriters but for some reason this one didn't hit for me. The title is accurate, but it listening to it is getting drunk to the point where you're not able to easily accomplish simple tasks and you get annoyed really easily but not drunk enough to really feel drunk. The best song is the 20 minute closer, which is a drum and bass song and sounds nothing like the rest of the album. I'd listen to a full album of that.

Matt Elliott makes the darkest music I've ever heard. This stuff is really intense in a slow, brooding kind of way. He is a great guitar player and composes his music really well. I hate his voice, though.

matt elliott was in Hood, and then he was The Third Eye Foundation, and then he began releasing albums under his own name, and this was the second. it's dark and moody, much like its predecessor "The Mess We Made". the song "The Kursk" tells the tale of the russian nuclear submarine disaster from the point of view of the men trapped in the sub. the final track, "The Maid We Messed" builds up over 20 minutes from gentle guitar passages to a cloud of breakbeat noise reminiscent of his 3EF word.

Your feedback for Drinking Songs