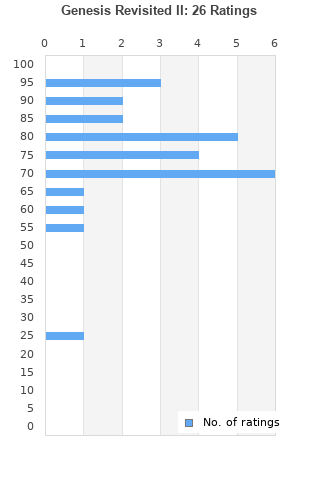 Genesis Revisited II is ranked 3rd best out of 37 albums by Steve Hackett on BestEverAlbums.com.

The best album by Steve Hackett is Voyage Of The Acolyte which is ranked number 3580 in the list of all-time albums with a total rank score of 407. 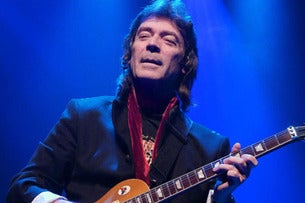 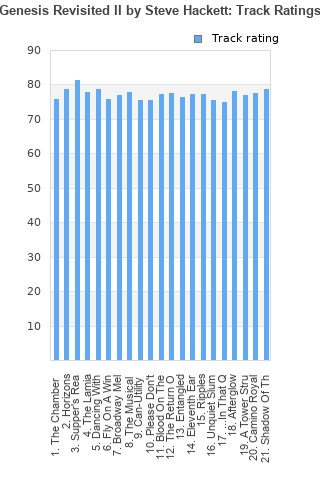 Rating metrics: Outliers can be removed when calculating a mean average to dampen the effects of ratings outside the normal distribution. This figure is provided as the trimmed mean. A high standard deviation can be legitimate, but can sometimes indicate 'gaming' is occurring. Consider a simplified example* of an item receiving ratings of 100, 50, & 0. The mean average rating would be 50. However, ratings of 55, 50 & 45 could also result in the same average. The second average might be more trusted because there is more consensus around a particular rating (a lower deviation).
(*In practice, some albums can have several thousand ratings)
This album is rated in the top 10% of all albums on BestEverAlbums.com. This album has a Bayesian average rating of 75.6/100, a mean average of 74.2/100, and a trimmed mean (excluding outliers) of 76.6/100. The standard deviation for this album is 16.0.

The musicianship is fantastic and the songs are obviously magnificent but to my mind what was the point of re-recording Genesis songs unless they were changed significantly, these are almost note for note identical apart from the vocals which are good but in no way come close to the perfection of Peter Gabriel, got to love Steve Hackett though.

Brilliant re-edit of a number of Genesis' best songs. Great work. I absolutely like versions of Lamia and Supper's Ready. Steve Hackett is a true talent. Some of his own old songs also appear on this album, the new version of Please Don't Touch really, really delivers.

Your feedback for Genesis Revisited II