3121 is ranked 14th best out of 61 albums by Prince on BestEverAlbums.com.

The best album by Prince is Sign 'O' The Times which is ranked number 190 in the list of all-time albums with a total rank score of 9,484. 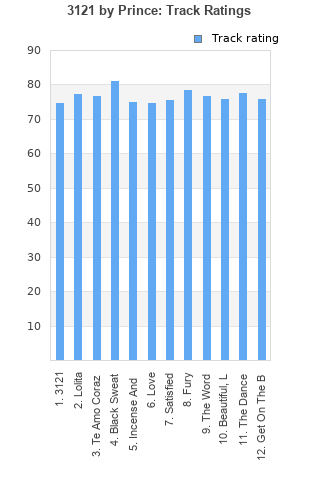 Rating metrics: Outliers can be removed when calculating a mean average to dampen the effects of ratings outside the normal distribution. This figure is provided as the trimmed mean. A high standard deviation can be legitimate, but can sometimes indicate 'gaming' is occurring. Consider a simplified example* of an item receiving ratings of 100, 50, & 0. The mean average rating would be 50. However, ratings of 55, 50 & 45 could also result in the same average. The second average might be more trusted because there is more consensus around a particular rating (a lower deviation).
(*In practice, some albums can have several thousand ratings)
This album has a Bayesian average rating of 70.3/100, a mean average of 69.9/100, and a trimmed mean (excluding outliers) of 69.9/100. The standard deviation for this album is 15.5.

Sigh, Prince used to be such an innovator, now he just copies himself.

Semi-decent album. Pales in comparison to what other 80s acts like Depeche Mode and R.E.M. were putting out at the time.

I like this album a little better than Musicology. He really lets his guitar work shine here, still there is nothing that remarkable on this album.

Doesn't deserve its dismissal. Not a patch on his legendary work circa 1980-1988 but a really solid latter period album loaded with catchy songs.

I was hoping for something even better than Musicology but I guess that album was too good to last. This was the last Prince album I've felt the need to buy, I just feel like I know what to expect by this point.