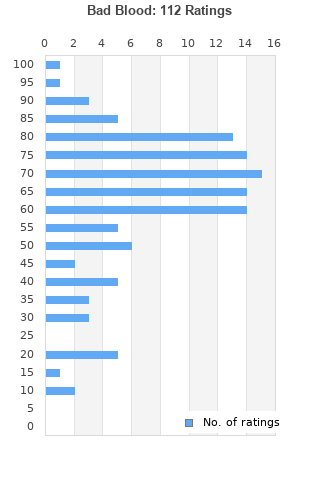 BASTILLE-BAD BLOOD- CD-our ref 1812
Condition: Very Good
Time left: 15h 1m 54s
Ships to: Worldwide
£1.99
Go to store
Product prices and availability are accurate as of the date indicated and are subject to change. Any price and availability information displayed on the linked website at the time of purchase will apply to the purchase of this product.  See full search results on eBay

Bad Blood is ranked as the best album by Bastille. 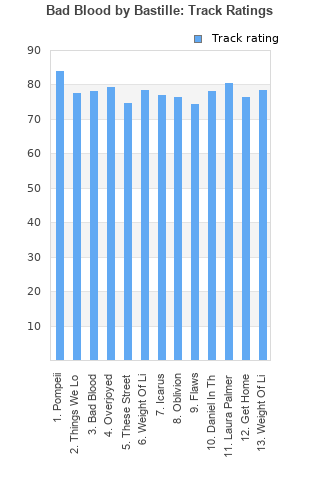 Rating metrics: Outliers can be removed when calculating a mean average to dampen the effects of ratings outside the normal distribution. This figure is provided as the trimmed mean. A high standard deviation can be legitimate, but can sometimes indicate 'gaming' is occurring. Consider a simplified example* of an item receiving ratings of 100, 50, & 0. The mean average rating would be 50. However, ratings of 55, 50 & 45 could also result in the same average. The second average might be more trusted because there is more consensus around a particular rating (a lower deviation).
(*In practice, some albums can have several thousand ratings)
This album has a Bayesian average rating of 64.0/100, a mean average of 63.2/100, and a trimmed mean (excluding outliers) of 63.2/100. The standard deviation for this album is 18.9.

I liked this one at some point, but ended up only listening to it for Daniel in the Den after a couple of revisits.

The problem here is that although the album is consistent, it's consistently mediocre. Bastille's pop songs aren't exuberant enough to be worthwhile (like Carly Rae Jepsen) or dark enough to be interesting (like Grimes). Why listen to something that stays within rigid conventions when there are countless pop artists pushing boundaries? I'm surprised a Twin Peaks fan, who named one of their tracks "Laura Palmer", would ever release something so... safe.

Thoroughly boring. Structured to meet the emotional needs of the average pop-rocker with boy issues. Overlong with not reason to be. The lyricism is as weak as their fans knees when they come out on stage. The instrumentalism is the only thing holding this album up, and even that isn't enough to impress anyone who listens to music for longer than the allotted 3 minute pop-rock sweet spot. I'd return to this album in the future, but I think I'd just dislike it even more then. So I can confidently post my rating with this comment, because I know it's not gonna change, just like the minds of the kids emersed in the all-too-ignorant pop scene. 3/10.

Solid, Good album. The lyrics aren't great, but everything else is.

I found this record to be superficial on every aspect (lyrics, sound). No doubt it is easy to access but I think Bastille will be quickly forgotten.

Enjoyed many of Bastille's singles and some songs from his EPs. I found this album to be a easy listen. Not a very accomplished album lyrically but some of the songs have some great hooks and this album is accessible to the mainstream audience. It's a shame that my favourite songs from the album are ones I previously heard in EP's. Most of the other tracks seem to be fillers.

Your feedback for Bad Blood