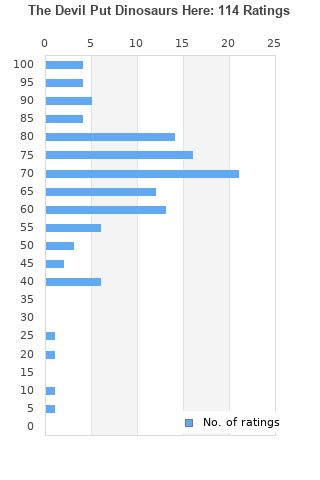 Alice in Chains-The Devil Put Dinosaurs Here (UK IMPORT) CD NEW
Condition: Brand New
Time left: 6d 9h 56m 24s
Ships to: Worldwide
$12.35
Go to store
Product prices and availability are accurate as of the date indicated and are subject to change. Any price and availability information displayed on the linked website at the time of purchase will apply to the purchase of this product.  See full search results on eBay

The Devil Put Dinosaurs Here is ranked 7th best out of 14 albums by Alice In Chains on BestEverAlbums.com.

The best album by Alice In Chains is Dirt which is ranked number 225 in the list of all-time albums with a total rank score of 8,734.

Listen to The Devil Put Dinosaurs Here on YouTube 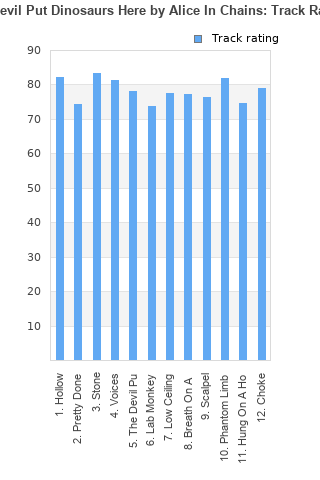 Rating metrics: Outliers can be removed when calculating a mean average to dampen the effects of ratings outside the normal distribution. This figure is provided as the trimmed mean. A high standard deviation can be legitimate, but can sometimes indicate 'gaming' is occurring. Consider a simplified example* of an item receiving ratings of 100, 50, & 0. The mean average rating would be 50. However, ratings of 55, 50 & 45 could also result in the same average. The second average might be more trusted because there is more consensus around a particular rating (a lower deviation).
(*In practice, some albums can have several thousand ratings)
This album has a Bayesian average rating of 68.9/100, a mean average of 67.2/100, and a trimmed mean (excluding outliers) of 68.5/100. The standard deviation for this album is 17.5.

This is a looooong record and it feels like it's due to the tracks outstaying their welcome a touch. However I feel like the musicianship is excellent. These are good songs which are expertly played and produced. Overall a really solid record.

This album is pretty solid I think, Stone is the best track on here and Lab Monkey and Breath On A Window are also great tracks.. Overall the last two AIC albums are both solid but they feel more like Jerry Cantrell solo albums.
In saying that I still really like them.

Uh oh... They made a crack about Jesus. Sorry, but that doesn't really change my opinion of this album. Easy to overlook before, easy to overlook after.

I thought there would be a few bad songs on this, but I didnlt find a single flop! There weren't many hits either, but an album this good means AiC still rocks after 24 years!

Overall, a surprisingly solid piece of work. A few of the tracks drag on too long, but the highlights (Voices, Phantom Limb, Lab Monkey, and Scalpel) more than make up for the duds. After a few listens, the album as a whole has really grown on me. To this point, one of the best rockers of the year.

Your feedback for The Devil Put Dinosaurs Here